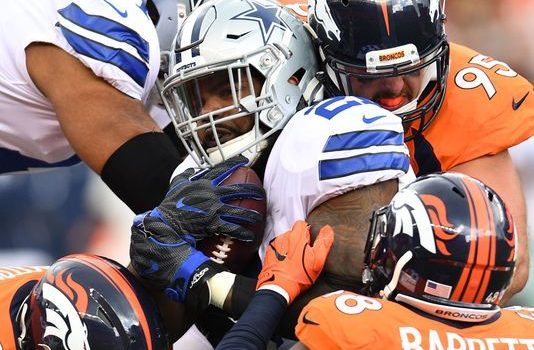 BRONCS’ BLOWOUT! FOR ZEKE AND COWBOYS, IT’S NOT 2016 ANYMORE!

Ezekiel Elliott, who led the NFL in rushing last season, had just 8 rushing yards on nine carries in the Dallas Cowboys’ 42-17 loss to the Denver Broncos.

Until midway through the third quarter, Elliott, the best running back in the NFL in 2016, didn’t have a single yard.

“It just felt like the entire game that we were working uphill,” Cowboys owner Jerry Jones. “I do not think this is a picture of what our team is, at all. We won’t accept that.”

Dallas won easily in Week 1, when they were rarely challenged by the floundering New York Giants. In a game yesterday that was interrupted by a 62-minute lightning delay in the first quarter, the Cowboys never found an offensive rhythm. That’s a credit to a stout Broncos defense that consistently swarmed Elliott and took away outside passing lanes from quarterback Dak Prescott. But Dallas failed also failed to adjust.

As the Broncos built a 21-7 lead by late in the second quarter, the Cowboys were forced out of the comfort zone of their ball-control offense. Instead, Prescott was left to throw a career-high 50 times. He was sacked twice by Denver linebacker Von Miller and threw two interceptions, which were rare missteps for a quarterback who threw just four picks as a rookie.

“I simply didn’t make enough plays,” Prescott said. “There’s no excuse for it.”

Prescott blamed himself and said that had he been able to hit more of his throws to Dez Bryant and Cole Beasley on the outside, it could have forced the Broncos to play more zone coverage and opened up more running room for Elliott.

The Cowboys cut the Broncos’ lead to 35-17 in the fourth quarter, but cornerback Aqib Talib sealed Denver’s win with a 103-yard interception return for a touchdown in the final minute of the game.

“They played better than us, clear as night and day,” Bryant said.

Dallas now stands at 1-1 and will need to spend the next week figuring out how to better utilize Elliott – if the running back is indeed allowed to play. The NFL has filed an appeal to the 5th Circuit court for a stay of an injunction issued by a district court judge that has put Elliott’s six-game suspension on hold. Elliott was initially punished for a violation of the personal conduct policy after an allegation of domestic violence last year.

Few defenses in the NFL are built to replicate the type of success the Broncos had against the Cowboys, with corners in Talib and Chris Harris Jr., who also had an interception, capable of playing man coverage on the outside and in the slot, an elite pass rusher in Miller and a surprisingly stout run defense that easily made Dallas one-dimensional.

But the blueprint is there. Stuff Elliott early and build a big lead, and the Cowboys might abandon the run game completely.

“This shows us we have a lot of work to do,” Elliott said. “We’ve got to watch this film. You have to see why you weren’t effective.”

The Cowboys also face questions about their defense after allowing the Broncos to rack up 380 yards, including 246 in the first half. Trevor Siemian threw for 231 yards and four touchdowns, including two to receiver Emmanuel Sanders, along with the one interception. Running back C.J. Anderson had 118 rushing yards and a touchdown.

Cowboys defensive end DeMarcus Lawrence had two sacks to bring his season total to four, but the Cowboys could not consistently generate a pass rush against the Broncos offensive line, leaving Siemian with plenty of time to allow Sanders and receiver Demaryius Thomas to get open.

“I was taken aback at how well they did offensively,” Jones said.

The Cowboys lost two cornerbacks in the game, with Chidobe Awuzie injuring his hamstring and Nolan Carroll suffering a concussion, leaving Dallas extremely thin in the secondary with starter Orlando Scandrick already out with a broken hand.