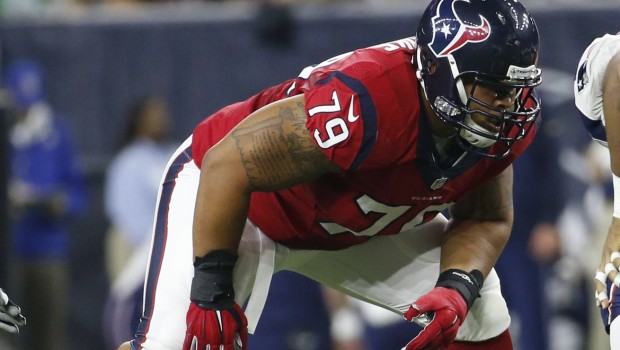 Looks like there is a bromance brewing on the Eagles offensive line between tackle Lane John and new guard Brandon Brooks (above).

Brooks, 6-5, 345 pounds, was a stalwart along the Texans offensive line and is slated to start alongside Lane Johnson at right tackle for the Eagles after signing a five-year deal with the Eagles worth $40 million, $11 of which guaranteed.

From the sounds of it, Johnson and Brooks are itching to get to work.

“We’ve really hit it off,” Johnson said during my radio show on 97.5 The Fanatic when asked about working with Brooks so far this offseason. “Ever since he’s got here we’ve gotten to become pretty good friends. Man, he’s just a guy that’s so big. He doesn’t look as big as he is. He’s probably around 340 [pounds] or somewhere around there.

“He’s a guy that’s extremely athletic. He’s very light on his feet and kind of unbelievable to watch. I think he’ll be a great wing-man for me for the next five or six years. We’re looking to create fear in guys that line up across from us.”

First-year head coach Doug Pederson’s system, or at least the scheme run by the Kansas City Chiefs under Andy Reid and with Pederson coordinating the offense, is predicated on running the football effectively. Having both Johnson and Brooks, two excellent road graters on the right side of the line could pay immediate dividends for the Eagles this season.

Johnson says that he’s looking forward to putting the scheme into action this season.

“We have chip pros, a lot of three-step game. It kind of incorporates a lot of stuff into one. Every team has a little tempo package. You need that in some circumstances. You need that. It’s good that we had three years to run it so it’s not foreign to us when we go out and run it.

“Doug makes it a lot of fun. People are excited to go to work and go play for him. As a coach, he’s going to go get everything out of you as a player. The one thing about him is that he’s played here. He’s been with the Philadelphia Eagles. He knows what this town is about; it’s about winning. I think he’s taking the best approach possible to win games.”