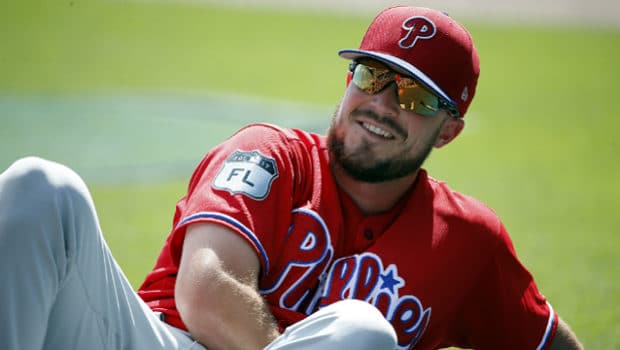 In his second major league start and eighth at-bat, Brock Stassi finally put his first hit behind him.

Stassi got all of an Addison Reed cutter and deposited it into the stands 413 feet away in yesterday’s 4-3 loss to the Mets at Citizens Bank Park.

His parents and brother, who had been in Philly all weekend and stuck around to see him start on Monday night, were treated to the celebratory occasion.

“That was awesome just to get it out of the way,” Stassi said after the game. “It’s been a long week and a half without even a hit.”

Stassi was 0-for-7 entering the at-bat, although he had walked three times in the season’s first week.

Hit toward the bullpens just beyond the right-center-field wall, the ball looked to Stassi that it was going to fall in play. He didn’t think he got all of it.

The cost of the ball going over the fence? Michael Saunders’ bat.

Saunders, who has 75 career home runs of his own, traded his bat to the fan who caught the homer.

“Saunders gave up his bat for me, the one he broke, because I’m running low,” Stassi said. “Saunders picked me up,” Stassi said, smiling.

Stassi felt like he had been pressing a bit in search of his first big league hit. With one in his back pocket, Stassi can now go about his business.

The homer cut the deficit to one, but it would not be enough to spark a comeback.

“I’m just happy I didn’t get too down on myself throughout the game and was able to put together a good [at-bat] at the end even though we fell short,” Stassi said.