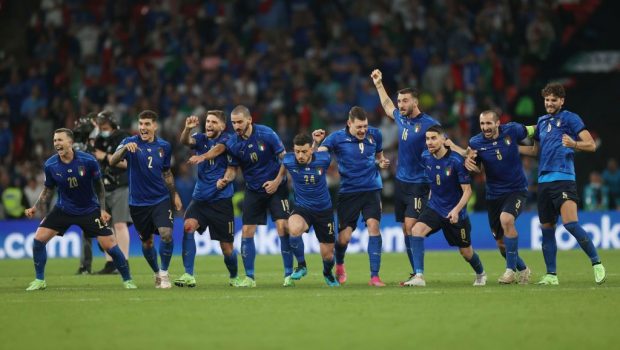 In the second minute of yesterday’s Euro 2020 final between England and Italy, England’s Luke Shaw scored a fantastic goal, and for a long stretch of the game, it seemed like football, to quote a very ubiquitous song, might actually be coming home. —In the 67th minute, however, Italy’s Leonardo Bonucci equalized. What followed was the very definition of a nailbiter, with both sides having chances to take the lead, only to be foiled by strong defending.

The goalkeepers for both teams — England’s Jordan Pickford and Italy’s Gianluigi Donnarumma — looked fantastic throughout the game, and it was perhaps fate that such a game would come down to a penalty shootout. And so it did, and when it was all over Italy were the champions of Europe and the English supporters at London’s Wembley Stadium were disheartened, to say the least.

As The New York Times noted in its report on the match, this was the closest England have come to winning a major tournament since the 1966 World Cup. On the other hand, Italy was considered by many to be the best team in the tournament, so their victory was hardly an upset.

Writing at The Athletic, Carl Anka noted that one decision made by England manager Gareth Southgate appears to have backfired — namely, bringing on Jaden Sancho and Marcus Rashford just before the shootout. Neither player converted; the same was true for Bukayo Saka. “Gareth Southgate’s England are not like the England teams of old, but they succumbed to the same Noble Defeat ending. It felt wrong,” Anka wrote. “Saka, Pickford and others, deserved better.”

Given how well Italy and England played here — and given the overall quality of the tournament — it bodes well for both teams in next year’s World Cup.