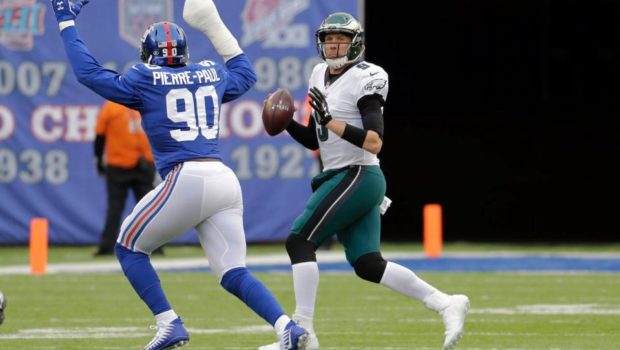 Anyone who has read our site for the past three years knows that FASTPHILLYSPORTS.COM has not been the biggest fan of Eagles big boss Howie Roseman.

But his performance this year, signing free agents, drafting quality collegians, has changed our minds.

And when Roseman signed Nick Foles to a two-year contract in March, he surely did not expect the veteran quarterback to be leading the playoff charge.

But that’s exactly what the 28-year-old quarterback is now doing for the 12-2 Eagles.

Making his first NFL start in 14 months, Foles orchestrated a 13-point comeback while carving up the New York Giants defense last Sunday to the tune of four touchdowns, zero interceptions and a healthy 115.8 quarterback rating.

Perhaps most encouraging moving forward is that the Eagles — who clinched a first-round bye — ran a nearly identical offense with Foles at the helm as they did with Wentz. Head coach Doug Pederson found success while mixing up a series of no-huddle and run-pass option, a constant in Wentz’s repertoire. Better yet, Foles — sacked just once — wasn’t bashful about maximizing all of his weaponry either. With a myriad of stacked formations along with empty formations, he completed passes to seven different receivers, including six balls and a score to tight end Zach Ertz, the dominant red-zone threat for Wentz. He was also extremely patient while allowing plays to develop and not forcing throws, while correctly identifying coverage.

NFL teams are conditioned to handle injuries and coaches preach the “next man up” philosophy ad nauseam. But losing a potential league MVP is a far different story, especially this late in the season, which is something not lost on Foles.

“The atmosphere that has been created, we’ve had a lot of injuries, but the guys that are injured are still there,” he told reporters following the 34-29 win over the Giants. “It’s not like they’re not a part of the team so they’re still creating that atmosphere that when things do go wrong, guys don’t blink.’’

Although Foles lacks the trademark elusiveness of Wentz, that doesn’t mean he can’t extend plays. He proved it last week making several contested throws to both Ertz while sprinkling in a full progression touchdown pass to Alshon Jeffrey that does not happen on accident. He also side-stepped Jason Pierre-Paul despite being dead to rights for a surefire sack.

With that top of mind, it would be foolish to dismiss Foles’ lone start as an aberration against a Giants defense that entered the game last in the NFL in total yards allowed.

It would also be foolish to expect the one-time Pro Bowler to replicate Wentz’s third-down wizardry. Before the injury, the second-year quarterback was converting an outrageous 39.6 percent of third downs of 10-plus yards. Foles encountered two such situations versus the Giants, failing both times, but showed promise by executing four third downs of five yards or more.

Moving forward, it will also be interesting to see what type of workload Jay Ajayi earns. The recently acquired Ajayi has supplanted LeGarrette Blount as the feature running back, and given the Eagles’ high-potent offense an added dimension as a result. Few backs in the league possess Ajayi’s physicality coupled with his elusiveness and home run ability. Since being traded from Miami, he has compiled a healthy 6.1 yard rushing average, including ripping off runs of 71, 46 and 30 yards, hence the big play threat.

Losing a player of Wentz’s caliber is a brutal blow — there is no way around it. But Foles under center is anything but your typical bandaid. He is confident and capable, experienced but not washed up. Plus he knows this offense and has a cadre of playmakers and top-tier offensive line at his disposal. Whether or not the Eagles earn the No. 1 overall seed remains to be seen (the Eagles close the regular season with a pair of home games against Oakland and Dallas), but they will enter the playoffs with every opportunity to capture the first world championship. And that’s all you ask for from your second-string quarterback.