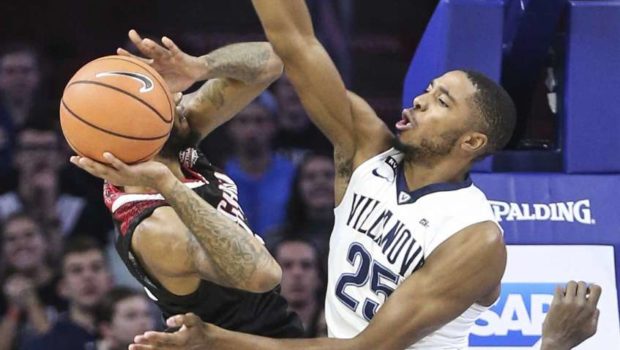 A new star has risen in the Villanova firmament to replace graduated Josh Hart and Kris Jenkins:

Mikal Bridges had a career-high 23 points and fifth-ranked Villanova blew away Nicholls State 113-77 at rhe Wells.

Donte DiVincenzo contributed 20 points and Jalen Brunson added 17 for the Wildcats, who improved to 2-0. Phil Booth had 12 and Eric Paschall 11 for Villanova. Collin Gillespie also chipped in with 10.

Nicholls State, which last reached the NCAA Tournament in 2014, was paced by Zaquavian Smith with 25 points. Roddy Peters added 17 and Tevon Saddler had 15.

The Wildcats, who had eight different players score in the first half, bolted to a 54-30 lead at halftime and never looked back.

Booth dropped in a 3-pointer and followed with a steal and coast-to-coast layup for a 70-42 advantage with 15:58 remaining. Booth scored 20 points against North Carolina in the national championship game in 2016, which was won by Villanova when Jenkins hit a 3-pointer at the buzzer. Booth missed the final 33 games last season with left knee inflammation and was granted a medical redshirt.

The Wildcats kept up their relentless pressure and DiVincenzo’s layup with 12:50 gave them a 76-45 lead.

Bridges led the way in the opening 20 minutes with a dominating performance — 17 points on 5-of-6 shooting, including 3 of 4 from 3-point range.