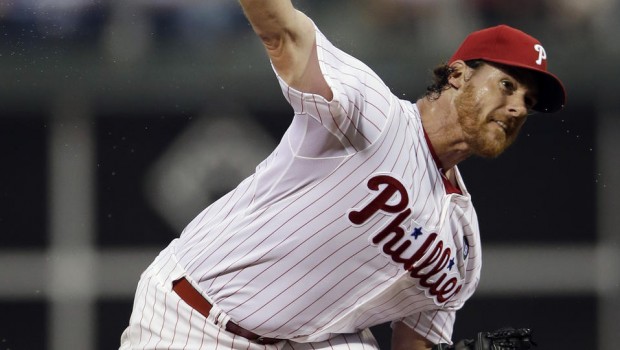 Phils starter Chad Billingsley gave up seven runs — six earned — and 10 hits in five innings in his first appearance since May 15. The right-hander missed several starts because of a strained shoulder.

How bad are the Phillies?

They just got swept by the Milwaukee Brewers, one of the worst teams in baseball!

Adam Lind hit a tie-breaking RBI single in the 11th inning to help the Brewers beat the Phillies 8-7 Thursday night to complete a four-game sweep.

The Brewers blew leads of 4-0, 5-2 and 7-4 but still won their fifth straight game in a matchup of teams with the two worst records in the majors.

Jonathan Lucroy opened the 11th with a double off Luis Garcia (2-3) and advanced to third on Ryan Braun’s groundout. Lind then singled up the middle to break the tie.

Michael Blazek (5-2) tossed two scoreless innings for the win. Francisco Rodriguez finished for his 18th save in 18 tries.

Cody Asche hit a two-run homer and was one of four Phillies with three hits. Odubel Herrera, Cesar Hernandez and Freddy Galvis all had three hits each.

Down 7-4, the Phillies rallied in the seventh. Ryan Howard hit an RBI double off Jonathan Broxton and pinch-hitter Ben Revere followed with a run-scoring single off Will Smith. After Asche walked, Galvis knocked in Revere with a single to left to tie it at 7-7. That ended Smith’s scoreless streak at 17 appearances and 16 2-3 innings.

The Brewers went ahead 3-0 in the first on consecutive RBI singles by Braun and Lind and a sacrifice fly by Aramis Ramirez.

Gerardo Parra’s RBI double made it 4-0 in the second. But Asche cut the deficit in half with a two-run shot in the bottom half.

Scooter Gennett singled in a run in the third for a 5-2 lead. Herrera hit a two-run single with two outs in the fourth to cut it to 5-4. But Jean Segura’s two-run single in the fifth extended Milwaukee’s lead to 7-4.