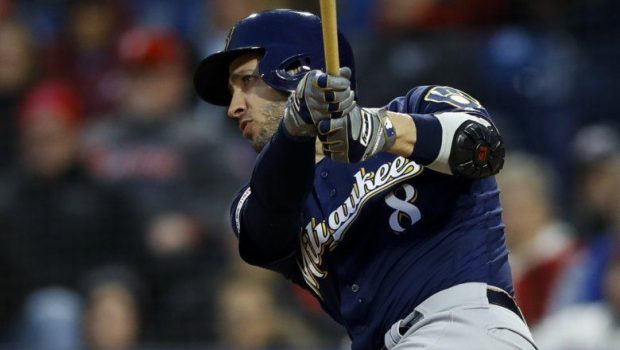 The Phillies’ Bryce Harper made a sliding catch on a foul ball to right field and banged his left knee into the wall in the sixth. Harper came up limping but remained in the game and made an almost identical catch to end the inning. He received a standing ovation only to get booed after striking out again in the eighth.

”It’s a little sore,” Harper said, adding he doesn’t know yet if he can play tonight.

Woodruff (6-1) allowed only an infield single to Jean Segura in the first, walked five and struck out five.

Grandal gave the Brewers a 3-0 lead in the second when he drove his seventh homer out to right-center.

Braun’s two-run shot to center in the third made it 5-0. Braun has 25 career homers against the Phillies, including 14 at Citizens Bank Park.

Segura’s RBI single off Corbin Burnes in the eighth knocked in the Phils’ only run.

Harper struck out twice and walked twice. He’s hitless in his last 14 at-bats and heard boos after his last at-bat in the eighth.