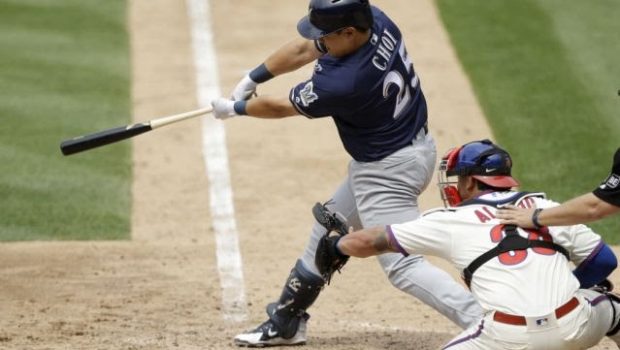 The Phillies are sinking in the East after another Brewers bash fest.

Ji-Man Choi smacked a pinch-hit grand slam in the sixth inning, and the visiting Milwaukee Brewers beat the Phillies 12-3.

Jake Arrieta (5-4) had a 3-2 lead in the sixth when the Brewers loaded the bases with one out on a catcher’s interference call against Jorge Alfaro, a walk and a hit batter.

Luis Garcia relieved and struck out Orlando Arcia. Choi fell behind 0-2, worked the count full and drove a 98.6 mph fastball to the opposite field in left..

Choi has nine career homers, including two this season. He played with the Los Angeles Angels in 2016 and briefly with the New York Yankees last season.

Jesus Aguilar and Jonathan Villar also went deep. Aguilar drove in three runs and Christian Yelich had three hits for the Brewers, who have outscored Philadelphia 24-7 in a pair of wins that maintained their NL Central lead over the Chicago Cubs.

Rhys Hoskins returned from a nine-game absence caused by a fractured jaw and hit a three-run homer for the Phillies, who have lost four straight and 10 of 13.

“I expect to get out of that inning unscathed and be able to maintain the lead, and I just wasn’t able to do that today,” Arrieta said.

Milwaukee opened a 10-3 lead in the seventh against left-hander Adam Morgan when Aguilar hit an RBI double and scored on Ryan Braun’s single, and Villar hit a two-run homer.

Aguilar hit a two-run, opposite-field homer to right in the first, ending Arrieta’s home scoreless streak at 15 1/3 innings. Arrieta’s home ERA spiked from 0.84 to 1.69 and he lost his first game at home in six decisions over eight starts.