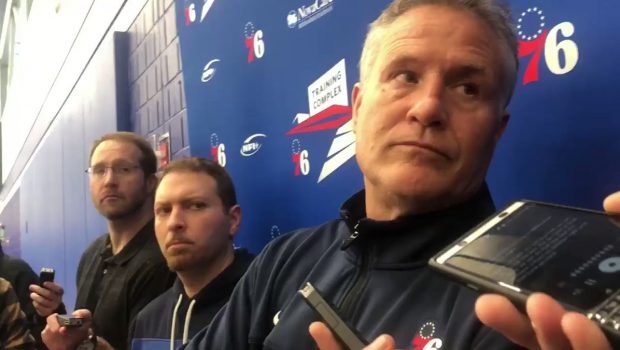 BRETT BROWN KNOWS CLOCK IS TICKING ON HIS SIXERS CAREER!

So Sixers coach Brett Brown met with the media the other day, and he put a spin on most everything.

But, judging from his remarks, he knows the team has underachieved into a 36-23 record and that his job is on the line if and when the NBA comes back from the pandemic pause.

He believes that the Sixers were built for the postseason and that any final verdict on his team right now would be incomplete.

“You’re human,” Brown said with regard to the potential of offseason changes. “You think about it all the time. I wouldn’t say you think about it to a point where it weighs you down, but I get it. For me, this thing is so incomplete. We’ve had our starters 19 out of 65 games. I feel like this team was built for the playoffs. … I felt like everything was pointing to us landing the plane, getting good health, and letting that be judgment day.”

“We’re looking to contend for a championship,” he said Friday afternoon in his first press conference since the NBA halted play in mid-March. “That hasn’t changed.”

The lower-back nerve impingement that knocked Simmons out of a February game against the Bucks has been shrouded in the Sixers’ usual veil of secrecy. Earlier this month, general manager Elton Brand all but said that Simmons would be ready to go if and when the NBA season resumed. Brown indicated that is still in the case, and offered an interesting recollection of the night Simmons went down.

“For those of you who remember in Milwaukee, that was as disturbing a memory as it relates to a player as I can think of,” Brown said. “He’s lying on his back. He’s vomiting, primarily because of pain. Trying to get him … back up to some level of health where he can play basketball again, and that timeline was always an interesting one. . . .The effort that he has put in, given where he was and the significance — he hurt his back in a real way — he is to be praised and applauded in a real way.”

“The professionalism and discipline that he has shown, having that pass to get into the facility, he’s teed off on that,” Brown said. “He’s been outstanding. It could be a little bit of the silver lining on this pandemic, the opportunity to get somebody like Ben back into our team.”

What about Joel Embiid’s health and conditioning?

“He’s got a real desire to be at the best playing weight that he’s been at since he’s been in the league,” Brown said. “I hope so, and I feel like he has a chance to do it,” Brown said. “Really, if the playoffs started, picking whatever date you want to choose, my ideal thing is I want to play him about 38 minutes. I really would. In a playoff situation, that’s my ideal number. I feel like Joel is completely aware that kind of as he goes with his health and his fitness, we go.”

Getting the players ready to play is one of the biggest concerns of coaches and executives across the league, and it is a topic that Brand discussed at length during his most recent media availability.

“We’re gonna hit the ground running,” Brown said. “We do not want to use this at all as an excuse. We need to hunt for a championship. In many ways, I feel like the carpet has been pulled from this team” pointing to the way the Sixers have finished the past few seasons.