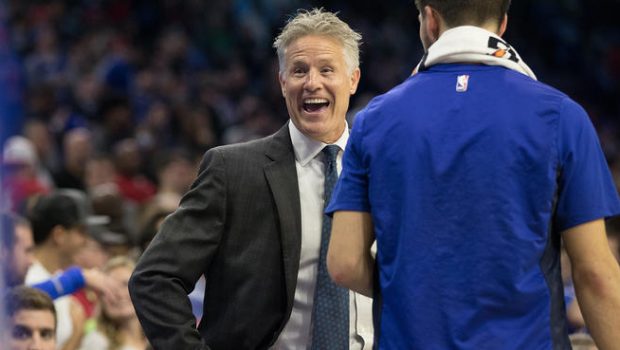 BRETT BROWN IS BACK! SIXERS MAKING IT OFFICIAL TODAY

Just 36 hours after a gut-wrenching 92-90 loss to the Toronto Raptors in game 7 of the East semis, the Sixers will make it official today:

Brett Brown will be back as Sixers’ coach.

A 9 a.m. press conference at their complex in Camden will make it official with owner Josh Harris and general manager Elton Brand discussing plans for the offseason, and how Brown fits in for the future.

The Sixers – who rebuilt their roster with two blockbuster trades – were knocked out of the Eastern Conference semifinal for the second straight season.

Kawhi Leonard sank the first Game 7-ending buzzer-beater in NBA history and Toronto struck its biggest dagger in the sports heart of Philadelphia since Joe Carter went deep for the Blue Jays in Game 6 of the 1993 World Series.

Joel Embiid walked off in tears, his girlfriend cradling the face of the crestfallen 7-footer.

Brown’s return was the most crucial decision facing ownership, as Harris for the first time put public pressure on Brown to at least reach the East final. And at an impromptu press conference before the start of the playoffs, Harris refused to say if Brown would return and offered only a lukewarm endorsement of his performance.

“What he’s done for this organization is nothing short of remarkable,” Redick said. “I would just say this in general, for any NBA team, when you think about a coach, and potentially replacing that coach, you have to consider what coaches are available. I don’t feel it necessary to defend Brett to anyone. I think his work speaks for itself.”

Like Redick, Brown’s players have never shied away from expressing their admiration and confidence in Brown. Brown never cracked at the pressure or sniped at the media as he became the public face of the franchise through the early years of the Process. He outlasted general managers Sam Hinkie and Bryan Colangelo and turned the team into conference contenders even as expected cornerstones Markelle Fultz, Jahlil Okafor, Nerlens Noel and others flamed out. Only six NBA coaches have longer active tenures with one team than Brown does in Philadelphia.

“If there’s someone to blame, put it all on me,” Embiid said.

But the Sixers struck it big when Embiid became a franchise player and No. 1 pick Ben Simmons turned into an All-Star. Both have major flaws in health (Embiid) and shooting (Simmons) that will stunt the franchise’s growth until they are resolved. Sure, the Sixers could pluck two-time national champion Jay Wright from Villanova much like the Cavaliers hired John Beilein, but the coach might not matter if Embiid can’t consistently stay on the court.

Brown, though, has taken heat for a lot of the team’s failures late in close games. Yes, Leonard’s four-bouncer through the rim was the defining play, but a pair of late shot-clock violations and rushed shots as it ticked down made the Sixers appear disorganized in the final minutes.

There are plenty of other questions in a crucial offseason.