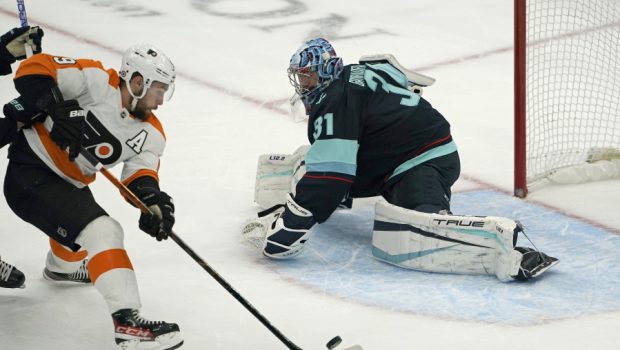 BREAK’S OVER, AND FLYERS KEEP WINNING, THANKS TO PROVOROV!

Ivan Provorov scored 2:14 into overtime and the Flyers beat the Seattle Kraken 3-2, improving to 5-0-1 in their last six games, continuing the team’s turnaround since losing 10 straight in late November and early December.

“In the third period we recognized that we were pretty fortunate to be in the position that we were in and we started to come out and have a better mindset,” interim coach Mike Yeo said.

James van Riemsdyk’s second goal of the night with 5:13 left in regulation pulled the Flyers even at 2. He scored 15 seconds after Seattle’s Jeremy Lauzon got his first of the season after having a goal disallowed by goaltender interference earlier in the period.

But the lead was gone in a blink when van Riemsdyk beat Kraken goalie Philipp Grubauer for the second time in the game. Van Riemsdyk also scored on a power play at 4:44 of the first period and has five goals in the past six games.

“Anytime you can get one to go you get that confidence and you start playing a little more free,” van Riemsdyk said. “I think generally that’s why those things come in a bunch.”

Martin Jones made 34 saves and kept the Flyers close with Seattle dominating most of the first two periods. Seattle doubled the Flyers in shots over the first 40 minutes and generated numerous scoring chances but failed to build a lead.

“We probably played too much in our own end but I thought we did a decent job defending,” Jones said. “Obviously we would like to build off how we played in the third.”

Seattle appeared to take the lead with 14:03 remaining in the third when Lauzon’s shot from the point and through traffic beat Jones. Philadelphia challenged, claiming goalie interference, and the goal was disallowed after a video review determined Seattle’s Jaden Schwartz had impeded Jones in the crease.

Yanni Gourde scored a power-play goal in the first period for Seattle. Grubauer made 19 saves but dropped to 7-12-4.

“Overall we played a really good game. But down the stretch, I think we just need to tighten things up,” Lauzon said. “We’ve seen that happen too many times for our team this year. So I just think moving forward it’s something that we need to take pride in.”

Both teams played for the first time since Dec. 18 due to COVID-19 protocols causing postponements and the NHL taking a longer holiday break than planned around Christmas. Seattle had four games postponed, while the Flyers had two postponed by all the recent schedule changes.