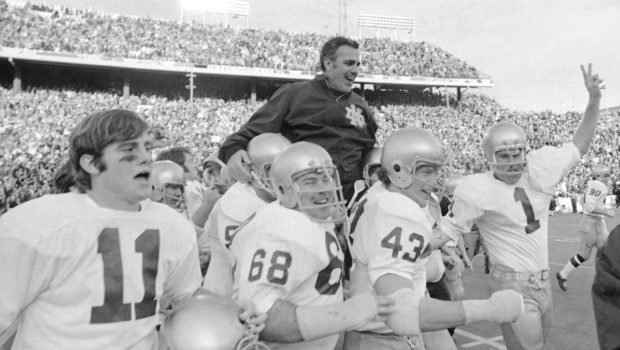 Ara Parseghian, who led Notre Dame football back to glory in the 1960s and 1970s, passed away early today at his home in Indiana, the Fighting Irish announced.

He was 94 and recently had battled an infection in a hip that previously had undergone five operations.

“Notre Dame mourns the loss of a legendary football coach, a beloved member of the Notre Dame family and good man — Ara Parseghian,” Rev. John I. Jenkins, Notre Dame’s president, said in a statement. “Among his many accomplishments, we will remember him above all as a teacher, leader and mentor who brought out the very best in his players, on and off the field.

Coming off a 2-7 season under interim coach Hugh Devore and with a combined 34-45 record over the previous eight years, Notre Dame hired Parseghian away from Northwestern in 1964.

The Fighting Irish finished his first year with a 9-1 record and ascended to the No. 1 ranking before a season-ending loss to USC dropped them to No. 3.

In 1966, Parseghian led Notre Dame to its first national championship since 1949, its undefeated season blemished only by a 10-10 tie with second-ranked Michigan State that still is regarded as one of the best games ever played.