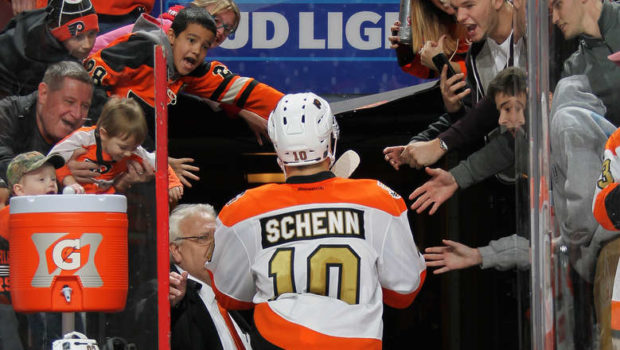 Brayden Schenn scored three power-play goals, including the game-tying and game-winning goals, as the Flyers defeated the Dallas Stars 4-2 at the Wells yesterday.

Schenn completed his second NHL hat trick trick with 2:15 remaining in the third period. Jakub Voracek’s shot from the right side hit players in front, and Schenn dove and scored on the rebound.

“Look who’s up top,” Schenn said, crediting Voracek, Claude Giroux, Shayne Gostisbehere and Mark Streit for setting up his goals. “Those [guys] make it happen up top and me and [Wayne Simmonds] find the garbage or the rebounds or the tips.”

Schenn also had three goals against the Calgary Flames on Feb. 29, 2016.

The play in which Schenn scored his third goal was similar to the ones that led to his first two goals, both off plays from the right side by Voracek.

At 17:18 of the first period, Schenn cut through the high slot and tipped Voracek’s shot between Simmonds’ legs and past Stars goaltender Kari Lehtonen to make it 1-1. At 16:12 of the third period, it was almost the same play, with Schenn cutting through the slot to redirect Voracek’s pass to tie the game at 2-2.

“Sometimes it’s open, sometimes it’s not,” Voracek said. “Depends how the killers are killing. [Schenn] had a free stick a couple times so I’m glad it worked.”

Voracek had a goal and three assists for the second straight game. He’s the first Flyers player with back-to-back four-point games since Eric Lindros on Dec. 31, 1997 and Jan. 3, 1998.

Shore’s second goal put the Stars ahead 2-1 at 10:32 of the third period, but two penalties later in the period proved costly. Defenseman Jamie Oleksiak was called for cross-checking at 15:06, and center Tyler Seguin for high-sticking at 17:03.

“We played a good game 5-on-5 and lost it with untimely penalties,” Seguin said. “I had a bad penalty there. You could say they had a couple of good looks on the power play or we have to find a way to be better on the kill.”

Voracek closed the scoring with an empty-net goal. He has 15 points (four goals, 11 assists) in his past eight games.

“I don’t think I’ve changed my game,” Voracek said. “Even if I went those six games without a point, from a couple weeks back I don’t think I’m playing any different now. When you stick with it and work hard, the points eventually are going to come. That’s exactly what’s happening now.”

Shore put the Stars ahead 1-0 at 7:30 of the first period, and gave them a 2-1 lead in the third when he pushed a puck under Mason and inside the right post.