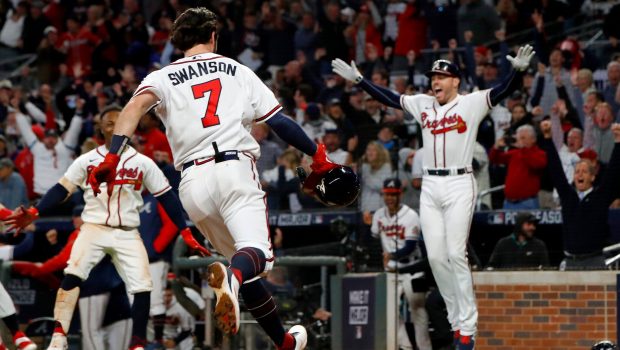 BRAVES WALK IT OFF AGAIN FOR 2-0 NLCS LEAD ON DODGERS!

The Atlanta Braves beat the Los Angeles Game 2 just like they won Game 1 of the NLCS, with a bottom-of-the-ninth-inning hit and a mad dash home.

This time, it was Dansby Swanson racing in from second base after Eddie Rosario blistered a ball that one-hopped off Corey Seager’s glove behind second base to give Atlanta a 5-4 win.

Players spilled out of the dugout and mobbed Rosario, just as they had Austin Riley 24 hours earlier when Riley singled for the first game-winning hit of his major league career.

The Dodgers arrived here three days ago after winning the N.L. wild-card game and then sending the team with baseball’s best record this year, San Francisco, packing in a division series.

“My arm was dead,” said starter Max Scherzer, who was making his third appearance in seven days and fourth in 12 days. “I could tell when I was warming up that it was still tired.”

Game 3 is Tuesday in Los Angeles.