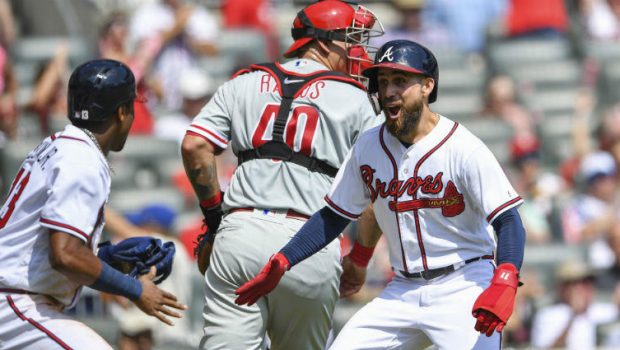 And their wild card hopes are hanging by a thread — they’re 7 1/2 games behind and could be eliminated today.

The Atlanta Braves capped a most surprising season by clinching their first National League East crown since 2013, with Mike Foltynewicz taking a no-hitter into the seventh inning in a 5-3 win over the Phillies.

A year after the team went 70-92, Manager Brian Snitker and his Baby Braves surged back into the playoffs. The Braves will make their first postseason appearance since their last division title on Oct. 4 in the N.L. division series.

Atlanta won its fourth straight game and beat the second-place Phils for the third day in a row. The Phillies also startled a lot of fans, leading the division in early August, but they faded while going 6-14 this month.

Foltynewicz (12-10) tipped his cap to a standing ovation as he left with runners on first and second in the eighth with a 4-0 lead.

Kurt Suzuki added a run-scoring single to make it 5-3 in the eighth against Seranthony Dominguez, Philly’s seventh pitcher.

Arodys Vizcaino, in his first save situation since June 17, closed out the ninth for his 16th save in 18 chances, getting Wilson Ramos to ground out, striking out Roman Quinn and retiring Maikel Franco on a fly ball to Acuna in left.

Atlanta led, 2-0, in the first after Arrieta walked three of the first four batters and Johan Camargo hit a two-run single.

Freeman hit a two-run single in the second to make it 4-0. Freeman, one of two current Braves who played on the 2013 division-winning team, is hitting .389 over his last 14 games.

Foltynewicz did not give up a hit until Odubel Herrera singled to begin the seventh. Franco singled with one out in the eighth.

The 26-year-old Foltynewicz has matured in his third full season, earning his first All-Star appearance and posting a 2.88 earned run average, almost two full runs lower than his career average entering the year.

Atlanta was not projected to contend when the season began. It had no proven ace and was counting on several young position players to complement Freeman, the lone big bat in the lineup.

The team had been embarrassed off the field with the former general manager John Coppolella barred from baseball in a signing scandal. But Atlanta, fueled by young, budding stars like Acuna, second baseman Ozzie Albies and third baseman Camargo, nev