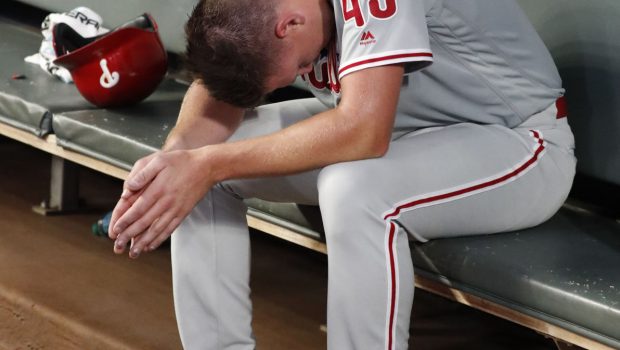 Donaldson clubbed his 16th homer of the season in the fourth inning to break open a scoreless game. Riley smacked his 15th homer to highlight a six-run sixth inning that also featured Joyce’s third long ball of the year.

The Braves broke a two-game losing streak and evened the three-game series.

The recipient of the offensive support was rookie Bryse Wilson (1-0), who allowed two runs on five hits and two walks with five strikeouts in six innings. It was easily the most effective of Wilson’s three starts this season, and it enhanced his argument to remain in the rotation.

Wilson, who lowered his ERA from 8.31 to 6.14, also picked up his first career hit in the third inning.

The Atlanta bullpen finished the game with three scoreless innings — two from Sean Newcomb and one from Jacob Webb. Newcomb and Webb each struck out two batters.

Phillies starter Nick Pivetta (above, 4-3) threw 5 2/3 innings and allowed six runs, five earned, on five hits. He walked one and struck out four. The right-hander continues to have trouble with long ball, having served up 16 homers in 61 2/3 innings this season.

After the Braves scored three runs in the fourth inning on Donaldson’s first homer since June 23, the Phillies cut the deficit to 3-2 by scoring twice in the sixth. Bryce Harper hit a solo homer, his 16th, Rhys Hoskins doubled, and J.T. Realmuto drove in a run with a single to left field.

It was Harper’s fourth home run against Atlanta this season.

The Braves put the game away in the bottom of the sixth. Freddie Freeman singled and Donaldson walked ahead of Riley’s long three-run shot to center field. Ozzie Albies and Tyler Flowers hit consecutive doubles to produce another run, and Joyce followed with a two-run shot, his second pinch-hit homer of the season.