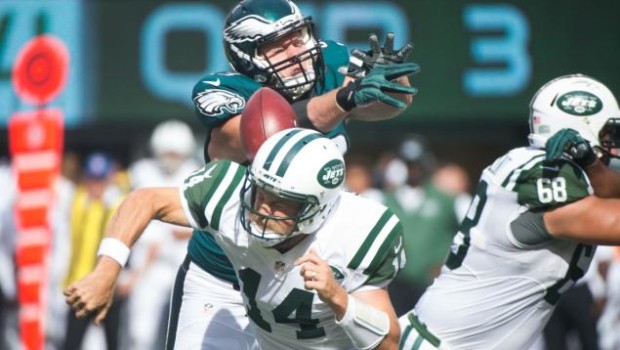 The question must be asked:

Where would the Eagles have been been yesterday in the Meadowlands as they beat the Jets 24-17 without the Rudy-like performance by 30-year-old Brandon Bair, who was making his first NFL start and had three big pass deflections, one resulting in a pivotal turnover?

Thrust into a leading role due to the broken hand of Eagles defensive end Cedric Thornton, who had started 34 straight games, and the shoulder injury to Taylor Hart, Bair responded with four tackles and a rejection of a Ryan Fitzpatrick pass that spun into the hands of rookie linebacker Jordan Hicks. The pick took the air out of the Jets.

“It felt great but when you’ve got guys like Fletcher Cox and Bennie Logan next to you, it’s a lot easier to relax and go out there and do your thing,” Bair said. “You don’t have to worry about anything, just playing your game.”