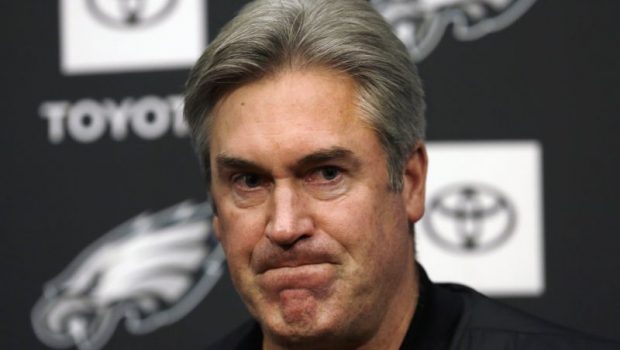 The Eagles looked like toast yesterday after a scoreless first half and a 16-point deficit midway through the fourth quarter.

But somehow they were in position to tie and send the game into overtime as they lined up for a two-point conversion with less than two minutes to play.

And then Doug Pederson lost them the game, by not calling a pass play.

Quarterback Carson Wentz drove the Eagles down the field, twice, completing seven of 10 passes on the two scoring drives. He completed the second two-point conversion attempt of the game, a pass to J.J. Arcega-Whiteside of all players.

After a miserable, embarrassing first half of offense, Wentz was stellar in the clutch.

Then Pederson overthought the most important play of the game, and the Eagles lost.

But you can put this one on the head coach who didn’t let his best player have one more shot at throwing the ball, and instead called a strange interior rush play in a short-yardage situation despite having a banged-up, swiss cheese offensive line. It was a bad decision, and it cost the Eagles the game.