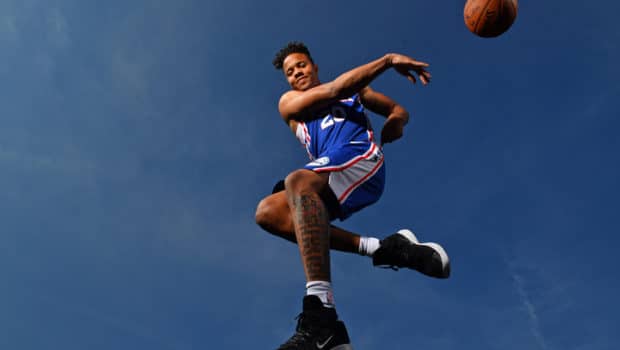 VERDICT: If you’re Philly, throw all your baggage, biases and any other ego-related variables down the toilet. It doesn’t matter that you gave up Tatum and the Lakers pick for Fultz anymore. That happened already. Is the hope—repeat: HOPE—of the 19-year-old Fultz’s ceiling worth more than an established star like McCollum? There’s a unique window with Embiid and Simmons right now. Is hope the best you can do?

Imagine going against those five dudes in a playoff series. How do you double Embiid in the half court? How do you handle Simmons on any fast break with elite shooters in three spots? How do you defend a McCollum-Embiid high screen? You’re looking at a defensive migraine from every angle. Redick (38.8 percent), Covington (41.6 percent) and McCollum (46 percent) average 18 3-pointers a game and make eight of them—they’re basically three of the 18 players averaging at least 2.5 made 3s per game. Only Golden State and Houston can throw out three shooters like that. If you can flip Fultz into McCollum, I would do it every day and twice on Sunday.

One problem: If I’m Portland, I want a little more. McCollum is one of the NBA’s 25 to 30 best players. Last season, he scored 23 a game and sniffed the 50-40-90 Club. Last June, maybe you’d flip him for Fultz at one-third the cost without blinking. What about now? Would they worry that Boston AND Philly gave up on Fultz for different reasons? Does he have the yips? Was he really hurt? Was this too big of a spotlight for him? Would a change of scenery help?

If I’m Portland, I counter with this idea …