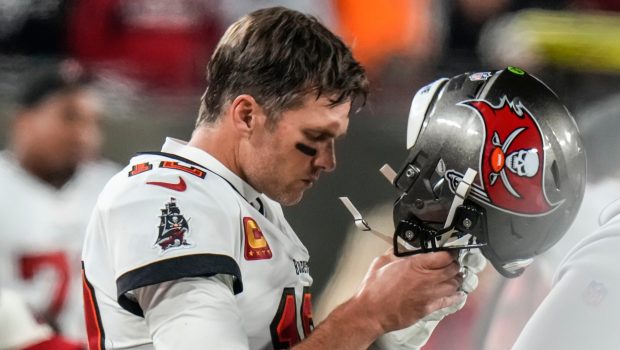 BRADY SHOULD RETIRE AGAIN — 35-FOR-66 IN BUCS LOSS TO COWBOYS!

Tom Brady completed 35-of-66 passes for 351 yards, two touchdowns, and an interception in the Bucs’ 31-14, Wild Card Round loss to the Cowboys.

He was given no support from the ground game and appeared to be on a different page than his receivers on multiple occasions.

Playing from behind then forced him to drop back an absurd amount of times. In this case, it resulted in him setting a career-high in pass attempts in a playoff game.

Last week, Brady set the record for pass attempts and completions in a single season. It was that type of season for Brady. He was asked to do a lot, but could only muster so much at the age of 45. Brady’s touchdown rate of 3.4 percent was a career-low and his mark of 6.4 yards per attempt trailed only his 2002 campaign.

After a brief retirement in the offseason only to come back for a one-and-done playoff appearance, Brady will undoubtedly think about hanging up the cleats for good this time around.

If he does, he will go down as the greatest to ever play the game. If he doesn’t, Brady will hit the open market as an unrestricted free agent. The Bucs, 49ers, Titans, and Raiders are all teams that would reportedly consider pursuing Brady. Per usual, expect another dramatic offseason from the GOAT.