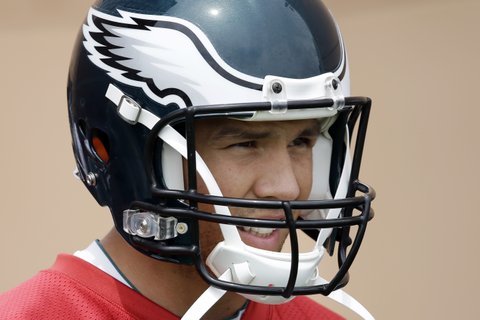 Eagles Supreme Leader proved he has world class confidence by trading the known factor of quarterback Nick Foles for the double-ACLed Sam Bradford.

Well, it turns out that Bradford’s balls are just as big as Kelly’s.

The Eagles took a chance onBradford by trading for him and choosing to pay him $12.985 million this season. But there’s no telling where he’ll play in 2016.

NFL Media Insider Ian Rapoport reported on NFL Network’s “NFL Total Access” on Monday that Bradford plans to play out the final year of his contract. Bradford is essentially betting on himself by not signing an extension now. If he stays healthy and plays well, he could maximize dollars later.

This is an approach that makes sense for both sides. With Bradford coming off back-to-back torn ACLs, the Eagles surely would like to see him look healthy and effective in Chip Kelly’s system before handing over huge guaranteed money. There’s no way they could offer him a true “franchise quarterback” contract at this stage without a ton of protections. As discussed during Monday’s podcast, Bradford has to win the Week 1 starting job over Mark Sanchez before taking the next step. That’s far from guaranteed.

Bradford has already played out a six-year, $78 million contract signed under the old collective bargaining agreement. With that in mind, long-term “security” might be less important to him. He already has it. After looking less than 100 percent in offseason practices, Bradford needs to prove to the Eagles — and himself — that he can still be a viable NFL starter. Do that in Kelly’s passer-friendly system, and the money is going to come.