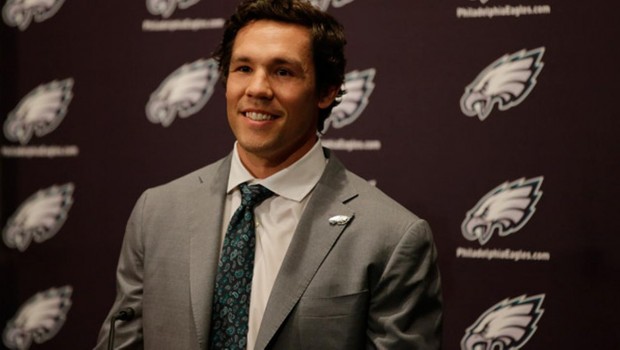 When was the last time you heard that the NFL’s rushing champion had called another team’s coach to express interest in playing for him?

ESPN’s Chris Mortensen — not a Jimmy Kempski-type blogger, he really has sources — is reporting that Dallas free agent DeMarco Murray personally reached out to Eagles coach Chip Kelly on Wednesday morning, expressing his desire to play in Kelly’s spread offense and with former Oklahoma roommate and quarterback Sam Bradford (photo above), according to league and team sources.

Murray’s call was enough to jump-start tepid interest from the Eagles, despite their signing of former Chargers running back Ryan Mathews. Murray is flying to Philly to meet with Eagles officials today, a league source told ESPN’s Adam Schefter on Wednesday night.

During his discussion with Kelly, a source said Murray characterized Bradford, who was acquired by the Eagles from the Rams on Tuesday, as one of his best friends. Both operated successfully out of Oklahoma’s spread offense when they were teammates from 2007-09. Murray also played the 2010 season at Oklahoma after Bradford moved on to the NFL.

“Absolutely. I’ve been trying my hardest,” Bradford said Wednesday of trying to recruit Murray. “I’ve called him. I’ve texted him. I’ve done everything. We’ve been in communication. If we can somehow land him, it would be a great pickup. Not only is he a great player, he’s a great person. He’s a really close friend of mine, too. I think he can really help this ball club.”

Of course, Murray just won the rushing title in 2014 for the Cowboys, running behind one of the best offensive lines in the league.

The Cowboys are still monitoring Murray’s market in free agency and would like to re-sign him.