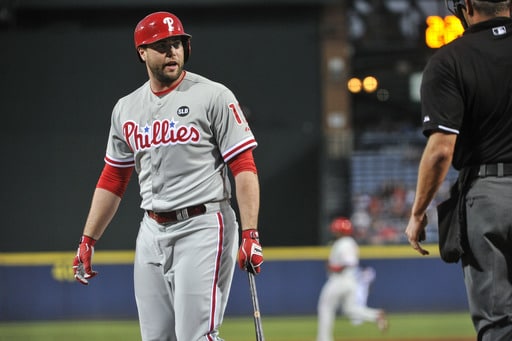 BRAVES KNOCK OFF PHILLIES 2-1 IN BAKE-OFF FOR MLB WORST!

When the two worst teams in major league baseball play one another, logic dictates that one team has to win.

And Friday night was no exception.

Cameron Maybin drove in the go-ahead run in the fourth inning and the Braves beat the Phillies 2-1. The Braves won for just the fifth time in 31 games and are two games ahead of the Phils, who have dropped 12 of 15, in the NL East.

Braves closer Arodys Vizcaino earned his fifth save in six chances with a shaky ninth. He walked the leadoff batter, third baseman Hector Olivera made a fielding error and Odubel Herrera reached to load the bases after striking out on a wild pitch.

But Vizcaino got Darin Ruf (above) to line out for a rare Atlanta victory and a rare scoreless performance by a bullpen that has the highest ERA in the majors.

”There were a lot of high-pressure situations and they were able to get us out of those situations,” Freeman said. ”That win is on them tonight.”

Atlanta took a 2-1 lead in the fourth when Freeman doubled, moved to third on a fly ball and scored on Maybin’s single.

The Phillies missed a chance in the sixth when reliever Andrew McKirahan, the third Atlanta pitcher, struck out pinch-hitter Jeff Francoeur with the bases loaded.

Philadelphia had a runner at third twice in the seventh, but pinch-hitter Chase d’Arnaud was tagged out a squeeze play and Aaron Altherr was stranded on Ruf’s groundout.

”We’re not getting the big hits we should get,” Phillies manager Pete Mackanin said. ”The only way we’re scoring is home runs and we’re not a home run hitting team.”

Braves starter Williams Perez (6-6) won his second straight decision, giving up six hits, one run and one walk, striking out six in 5 2-3 innings.

Adonis Garcia’s RBI double put the Braves up 1-0 in the first, but manager Fredi Gonzalez replaced him with Michael Bourn in the top of the second after Garcia was tagged out for overrunning the bag.

Cameron Rupp’s ninth homer made it 1-all in the second.

Phillies: Mackanin still isn’t sure if RHPAaron Nola will make another start after Sunday. Nola, the No. 7 overall draft pick of 2014, has thrown a combined 175 innings in the majors and minors, and the team originally didn’t want him to go past 190. … 1B Ryan Howardhasn’t played since injuring his left knee Monday. The Phillies aren’t sure if he will play again this year, but Howard is on the three-city trip that began Friday.

Braves: RHP Dan Winkler, a Rule 5 draft pick taken in December from Colorado, will be available in the bullpen to make his major league debut Monday. He had Tommy John surgery in June 2014. Gonzalez said Winkler threw a simulated game Friday and will take the next two days off.