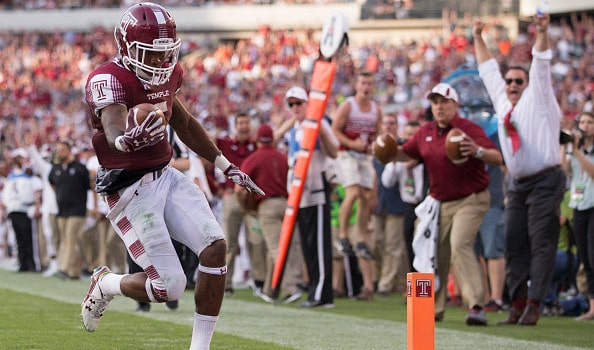 It was a cold and windy Saturday night at the Linc, which may have contributed to the fact that Temple needed to scramble in the second half to overcome pesky UCF.

But Jahad Thomas (above) rushed for a career-high 199 yards and three touchdowns to lead the unbeaten Owls to a 30-16 victory.

Thomas had 31 carries, including touchdown runs from the 12, 22 and 21, while Ventell Bryant snagged a 3-yard pass from P.J. Walker for another TD. The Owls (6-0, 3-0 American Athletic Conference) made two-point conversions after both of Thomas’ fourth quarter TDs.

Temple became bowl eligible with the win, which gave the Owls their first 6-0 season start since 1974.

The Knights’ only touchdown came from Shaquill Griffin, who intercepted Walker’s pass in the second quarter and returned it 81 yards.