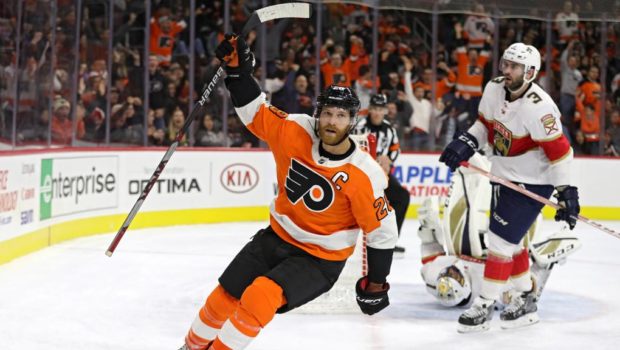 You want to know why the Flyers have now won five straight games after losing 10 straight?

They are now 11-0-3 when leading after two periods and their ability to finish games has come back in a big way since the 10-game losing streak. It was then that those three overtime losses came when they choked on leads against the Pittsburgh Penguins, New York Islanders and Winnipeg Jets.

“Just mentally, when you’re not doing so well, when you’re not winning and you go into the third and you’re down a goal or up a goal you have some doubts in your head,” Claude Giroux (above) said. “I think in the last few games just that confidence of knowing we can close out a game or get that one goal back, it’s huge.”

Six of the Sabres’ 20 shots game in the third period, but the Flyers weren’t playing hold-your-breath hockey like they were a couple weeks ago.

“We lost 10 in a row there and you could see in the last couple minutes when we had a lead guys are panicking. We’re throwing the puck away,” Dale Weise said. “We had some good poise down the stretch tonight. It’s execution, but it’s a big mental game, too.”