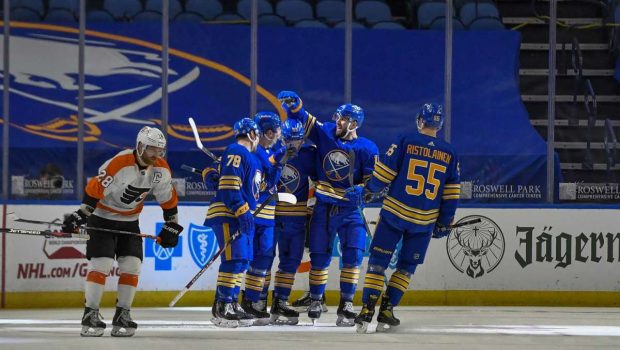 Can it get any worse for the woeful Flyers?

They fell three points behind the Bruins for the last playoff spot in the East division with a loss last night to the worst-in-the-NHL Buffalo Sabres.

The Sabres ended their 18-game skid — the NHL’s longest in 17 years — with a resounding 6-1. Rather than squandering a 3-0 third-period lead, like it did during a 4-3 overtime loss to the Flyers on Monday, Buffalo put it away by scoring the final four goals.

Coming off consecutive wins for the first time in a month, the Flyers’ inconsistencies turned up again in dropping to 6-10-1 in their past 17. The slump has dropped them into fifth in the East Division.

“No matter what, we’ve got to turn the page,” said Sean Couturier, looking ahead to the Flyers’ next opponent. “Obviously it’s an embarrassing loss but we’ve got a big game here coming up against the Islanders. We’ve got to make sure we’re ready to get the two points.”

Elliott, who stopped 29 shots on Monday and shut out Buffalo twice already this season, dropped to 17-3-2 for his career against the Sabres.

With Carter Hart relegated to practice-only duty to see if the third-year starter can shake off a season-long funk, Alex Lyon finished the game for the Flyers in his first appearance of the season. He made nine saves on 10 shots.

The Sabres also snapped a 0-9-2 home skid, one short of matching a franchise record set during the 1990-91 season. Buffalo won for just the third time at home, and first since a 4-3 shootout win over the Devils on Jan. 30.

Linus Ullmark stopped 31 shots and was greeted by a long line of Sabres, led by Rasmus Dahlin, after the final horn sounded in an arena without fans. Steven Fogarty scored his first career goal and added an assist.

The win was the first under interim coach Don Granato, who took over after Ralph Krueger was fired March 17 during a calamitous season likely to end with Buffalo extending its playoff drought to an NHL record-matching 10th consecutive year.

“There’s no question that it was important to put the streak behind (us) so everybody can move on. But we absolutely had to block it out,” Granato said. “They pulled together instead of apart, and that showed that they learned.”

Buffalo’s Sam Reinhart and Curtis Lazar scored 2:27 apart in the opening period. After Philadelphia’s Ivan Provorov scored 3:50 into the second period, Buffalo responded by closing the period with goals from Fogarty and Casey Mittelstadt.

Mittelstadt’s goal, a softie which beat Brian Elliott through the legs, chased the Flyers goalie after he allowed four goals on 16 shots.

Buffalo was coming off consecutive games in which it blew leads in a failed bid to end the drought. On Saturday in Boston, the Sabres blew two one-goal leads in a 3-2 loss to the Bruins. Then came the meltdown on Monday, in which Couturier tied the game with 1:29 left, and Provorov sealed it 42 seconds into overtime.

This time, the Sabres made their lead stick, even after Provorov’s shot from the left point banked in off Montour, or while being outshot 11-0 through the first nine minutes of the second.

Fogarty scored on Buffalo’s second shot of the frame after being set up alone in front at the 9:42 mark.

After what happened Monday, Montour acknowledged waiting until the final horn sounded just to be sure.

“You obviously have that in the back of your mind, but that game (Monday) was over. You’ve got to wash it,” Montour said. “But it was good to hear the zero there and it was good to win.”