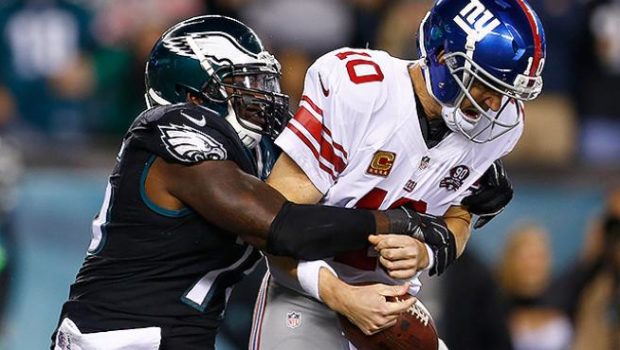 BORN BLUE, BLEEDING GREEN: CONFESSIONS OF A GIANTS JUNKIE WHO LOVES THESE EAGLES!

As a native New Yorker, I have bled Big Blue for the New York Football Giants.

I have always wished crushing defeats for the Eagles – ever since I called into WIP to bitch about Buddy Ryan’s antics ( it’s Alan from Merion).

I have withstood years of trash-talking sons who repudiated my teachings and have devotedly endorsed the Iggles as their team (they bleed green and forced me out of my house after DeSean Jackson’s punt return – if you don’t know what I’m taking about you are not an Eagles fan).

I succeeded in making them Yankee fans though I believe one son roots for the Phillies behind my back – he went to the Phillies parade without me knowing when he was 15 .

I remember in the Bellvue gym on the stationary bikes lambasting then Mayor Rendell for his betraying his New York roots and his devotion with his dad going to the Giants games — ” I don’t care that you’re the mayor of Philadelphia blah blah/ you don’t turn your back on the team you grew up with.”

BUT I have despised the Patriots.

Tom Brady came up small in the character department in Deflategate (I went to the 2nd Circuit Court of Appeals argument in NY ) and so did the Kraft family with their Trumpian disrespect for the facts, their dishonesty and the miserable example they set for kids throughout New England.

I’m old fashion when it comes to integrity and owning up to mistakes.

As much as I love and respect Belichick’s genius — I loved watching him coach the Giants defense in training camp: he never smiled then either — his one flaw of cheating when no one is looking pissed me off( the integrity thing.

I have lost Boston friends because of the Brady issue. So like the rest of our nation the hell with the Patriots.

Kraft thinks we are all jealous.

He is clueless if he really believes that. He needs to look in the mirror.

And then there is Doug Pederson who we all underestimated big time. It shows how affect and appearance can sometimes mislead us.

That he was a master play caller – a savant in that department. That he had the inner security to allow Schwartz to own the defense. A guy no one wanted wins the Super Bowl in his second year.

That’s a story to inspire all kids in the mid Atlantic region.( see Kraft family above)

Then there is Wentz who with talent, guts and abandon carries an entire team to the brink , the MVP, only to become an appendage for the final push to glory.

Then there is Howie Roseman who to me was in over his head, who probably back-stabbed Banner and looked childish, who made the effort during his banishment to learn from his mistakes and grew into a leader and allowed his intelligence to shine over his ambition.

And then there is Jeff Lurie.

I remember watching our sons in Little League. He was a fan, as we would check the scores on his phone for his favorite teams from Boston.

He has grown and matured and has learned from his mistakes. And there is no owner with intentions better than his. Jeff has transformed the Eagles and the community. He is a good man. Jeff has more integrity and respect for the facts in his pinky than the Kraft Father and Son team.

So I rooted for the Eagles.

At first my psyche was rattled. It was like a heart transplant and my body was rejecting the new heart. I was disoriented. I was dizzy. I couldn’t root for the Eagles though I tried .

I said the right things to my Eagles friends. But then during the game a mystical thing happened. As Foles ( I love underdogs) drove them down in the first drive, I could feel a surge of pride percolating inside my veins.

It was a DNA response unconnected to my brain. I jumped out of my seat when Ertz committed the penalty inside the five. ( you don’t beat Brady with field goals) it was a reflex reaction.

I found myself ROOTING for the hated Eagles. I was transformed. By the end of the game I was screaming and joyously high-fiving my son. I was Ebeneezer after the ghost of Christmas future had visited. The new heart was pumping blood throughout my body as if it had been inside me for 67 years.

I can honestly say I am joyful for our city, my friends, our pride, our integrity and brotherly love that a great team of great guys (players, management, ownership) achieved what seemed to be the unachievable.

So I apologize for the length of this opus but how often do we , I mean you, win the Super Bowl. Enjoy!!!

Alan Cotler came to Philly from New York to attend Penn and played on the 1971 Quakers team that went 28-0 and is considered the greatest regular season Big 5 team in history. He is a retired attorney.