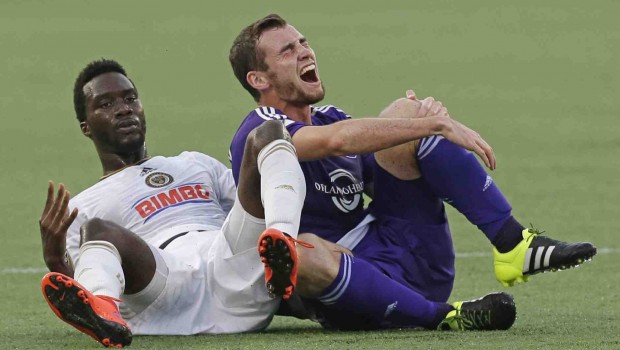 The 2016 Major League Soccer season is about to begin, and if you’re hoping for EPL quality look elsewhere.

Between 35-year-old former EPL champions and fringe players fresh out of college, MLS does have a few exciting players whose work any interested neutral could enjoy. Additionally, the league is stocked with young Americans who could make an impact for the USMNT someday.

What follows is a team-by-team look at who these guys are. The winning and losing of MLS games is irrelevant for our purposes here, the only axes I’m measuring on are fun and potential to play for the U.S. national team.

Chicago Fire: Brandon Vincent got his first USMNT cap before his first professional game, so that’s cool, and he plays left back, which is a position where the U.S. has always struggled. Chicago is also pretty bad, so he’ll get plenty of action.

Colorado Rapids: Nah. You could talk yourself into Dillon Serna, but c’mon man.

Columbus Crew: Wil Trapp has a weird spelling of his name, but he’s been the heir apparent to Michael Bradley for a few years. He’s good, and (if you like solid defensive cover and extremely quiet yet effective distributing out of the deep midfield) fun to watch. Winger Ethan Finlay has one move (flying in a straight line then crossing it to Kei Kamara) that somehow works every time, and he’s earned a spot on the USMNT. He always subs out in the 70th for Cedric Mabwati, who can jitterbug his way through locked defenses as well as almost anyone in the league. Also, the U.S. is trying to poach Cameroonian Tony Tchani, who is “okay.”

D.C. United: Steve Birnbaum fights people and plays center back for the USMNT, along with his keeper Bill Hamid. Shout out to them, but you don’t watch games for the central defenders or goalkeepers.

FC Dallas: 18-year-old Alejandro Zendejas is allegedly the truth and he plays a position the U.S. has never been good at (attacking midfielder). I hope he plays more this season, but he’ll be backing up one of the best 10’s in MLS (Mauro Diaz who is lively and fun). Elsewhere, Fabian Castillo is probably the most exciting player in the league. He’s faster than hell and all he wants to do is roast hapless 31-year-old MLS right backs, which he does like 11 times a game. He’s been capped for Colombia, and FC Dallas will probably sell him to someone on the continent soon. Also, Kellyn Acosta and Matt Hedges are young American guys. This is probably the most fun team to watch in MLS.

L.A. Galaxy: Haha, Steven Gerrard sucks now, and so do Nigel de Jong and Ashley Cole. This is the original cash-out team and they’re honoring their history with this year’s roster. Anyway, they do have Gyasi Zardes and Gyasi Zardes 2 (a.k.a. Bradford Jamieson IV) and Robbie Rogers, plus some good kits.

Montreal Impact: Watch Didier Drogba nap his way through destroying some shit-ass defenders in between regular weeks off.

New England Revolution: It’s a graveyard of Next American Hopes here, between Juan Agudelo, Charlie Davies, and Teal Bunbury. Maybe Diego Fagúndez will become good soon, but I hope he waits long enough so he doesn’t get cap-tied by Uruguay while he waits to become eligible for the USMNT.

New York City FC: Pirlo is carved from granite, and he’ll probably run less than a kilometer per game, which is always entertaining. But this team’s old dogs are particularly old and they give up a buttload of goals.

Orlando City SC: Cyle Larin is a good young Canadian, and Kaká is still spry, but there’s not much else to care about.

Portland Timbers: Darlington Nagbe is probably good, and so is Alvas Powell. I also like the big brick of faux Tillamook cheese in a corner of their stadium.

Sporting Kansas City: Everyone keeps saying Benny Feilhaber should get another chance with the USMNT, but whose spot exactly is he taking? He ain’t better than Michael Bradley, Darlington Nagbe or, hell, even Christian Pulisic. Feilhaber is an elite MLS midfielder but he doesn’t really fit into an obvious position of need for the U.S. Anyway, this team is deeply average.

Toronto FC: Sebastian Giovinco is entertaining and will score a million goals this year. It’s kind of depressing more than anything watching Michael Bradley and Jozy Altidore waste their primes on this team. I wish Bradley was still in Europe and that Jozy was good enough to play in Europe.

Vancouver Whitecaps: A happy ending! Vancouver rules. They have the best jerseys in the league, and also Kekuta Manneh, who is a lively winger full of spit and venom who will clown a bunch of guys this year. Manneh is a more rounded, less explosive Fabian Castillo who the U.S. might poach from the Gambia. They also have a bunch of young cool Canadians, if that’s your thing.