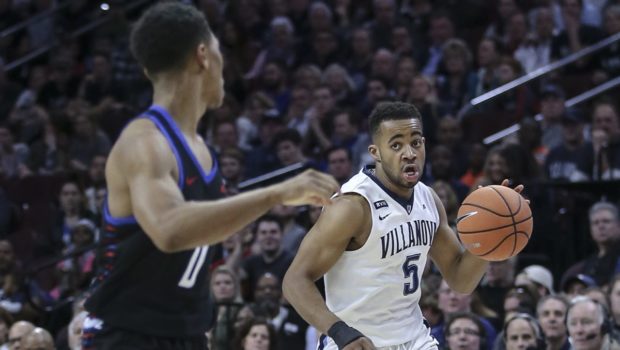 Phil Booth had 14 points in his comeback from a broken right hand and Mikal Bridges scored 27 points to lead No. 3 Villanova to a 93-62 victory over DePaul.

Booth, who played 16 minutes, was injured Jan. 23 against Providence, had his cast removed Friday and practiced Tuesday.

“It’s great to have him back,” Wright said about Booth, who entered averaging 11.6 points. “It’s a tribute to him. It looked like he never had anything wrong at practice. He looked good tonight, completely fine. It just amazes me.”

Booth scored eight points in eight minutes to help the Wildcats to their 16-point halftime lead.

“It felt good to be back out there,” Booth said. “A little rust but I wasn’t worried about offense. My hand felt great.”

The Wildcats had a comfortable 46-30 lead at the break. They surged to a 27-point advantage with 17:47 left in the contest by scoring 13 of the first 15 second-half points over 2:13. Bridges capped the run with a 3-pointer that made it 59-32 and practically erased any chances of a DePaul comeback.

Bridges had 15 points and Paschall added nine in the opening 20 minutes. Villanova was 10 for 14 from the free-throw line while the Blue Demons didn’t attempt a foul shot. For the game, the Wildcats finished 15 for 21 from the line while DePaul was 0 for 1.