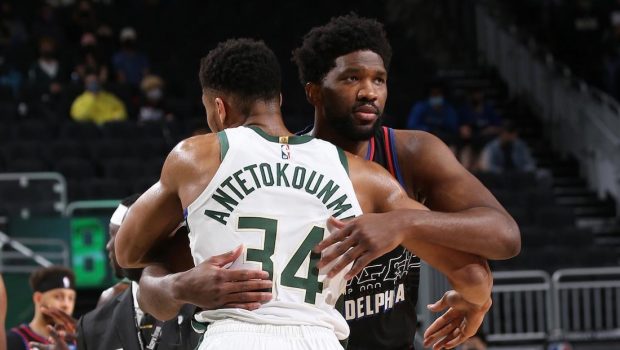 BOOS FOR SIXERS AT HOME — DREADFUL DEFENSE COSTS THEM AGAIN!

The Sixers have played two games so far, both against elite East teams they have to get by to make the NBA Finals.

Wesley Matthews hit the go-ahead 3-pointer with 23.8 seconds left, and Giannis Antetokounmpo had 21 points and 13 rebounds to lead the Bucks to a 90-88 victory over the Sixers.

The 76ers lost their opener Tuesday night in Boston and had another weak defensive effort early that had the Philly crowd booing them off the court in the third quarter.

Tyrese Maxey added 15 points for the Sixers. Joel Embiid was shut down by Lopez and Antetokounmpo and did not score in the second half. Embiid, who declined to talk to the media, finished with 15 points and 12 rebounds.

“It’s tough. He’s such a load,” Lopez said. “You’ve got to try and keep him off his spot as much as possible. But pretty much every place on the floor is his spot.”

Embiid, who had offseason surgery to repair a torn ligament in his right thumb, had another four turnovers. He had six against the Celtics.

“It does affect you for a long time, especially if he gets hit,” coach Doc Rivers said. “Those are still raw moves. As a big, I’m assuming he gets hit every game. You’re not injured, it’s just painful.”

Harden finally got the Sixers rolling in the fourth when he scored eight straight points and cut a 12-point deficit to single digits. Trying to bulk up the defensive lineup with toughness, Rivers turned to Harden, Tobias Harris, P.J Tucker, De’Anthony Melton and Daniel House Jr.

The 76ers forced shot clock turnovers and forced the Bucks out of bounds. Tucker stole the ball and hit Harden for the layup that made it 80-all with 6:41 left. Harden, whose nagging hamstring injuries from last season seem behind him, had a bucket that capped a 13-0 run, all done with Embiid on the bench.

Antetokounmpo snapped the tie when he pushed through for Milwaukee’s first basket in more than four minutes.