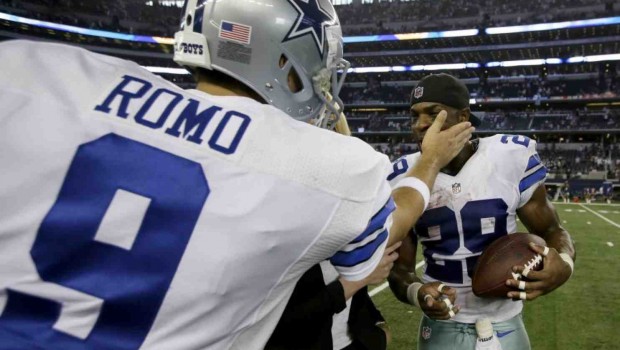 BOO-HOOING TONY ROMO SAD TO SEE DEMARCO AS AN EAGLE

My heart bleeds for him.

The Cowboys quarterback said while he understood the business side of running back DeMarco Murray leaving for the Eagles it was also a move that hit him at a personal level.

“It just happened, so you have to process everything,” Romo said, via Todd Archer of ESPNDallas.com. “All the way up until today, I was still thinking we’d be able to keep DeMarco. Obviously, it’s not an ideal situation.I’m losing a close friend, too, so that hurts.

“We have to trust in the process and the people making the decisions. We have salary cap implications and a bunch of other things that we have to decide. That plays a role. The Eagles obviously thought as highly of him as we did.”

Romo said he was lobbying Murray to stay, probably as much as Murray’s old college roommate and now-Eagles quarterback Sam Bradford was.