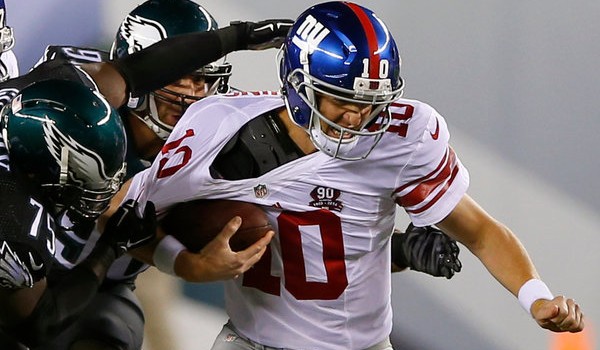 BOO-HOOING FOR OLD AND BAD ELI MANNING! PLEASE STOP! WHY CAN’T HE JUST GO AWAY?

Bummed that your favorite player got traded? Get over it. Aghast someone left town for a richer deal? That’s what you would do, too. Furious that ownership canned a coach who once brought the city a title? Don’t be naive.

Sports is just another Industry of Now. Attachment is for kids. Or suckers.

Every once in a while, however, there’s a brief, permitted flash of sentimentality, like this week, when the New York Giants decided to bench their veteran quarterback, Eli Manning, to give the backups a look.

The move has a few molecules of sense: the Giants are 2-9 and going nowhere. The team has five games left, and, with a presumably high draft position next spring, it should see what it has in its apprentices Geno Smith and Davis Webb.

It isn’t the worst idea for Manning, either. He’s 36 years old, and wants to play more. Why take the risk of getting hurt in a game that means zippo?

This is the kind of hard transition that happens all the time in sports, not to mention business in general. But it isn’t so simple.

It isn’t simple because New York is attached. Manning has played 14 seasons and won two Super Bowls and has started 210 consecutive regular-season games. He is, quite literally, always there. He has seen the Giants through improbable highs and more than a few skittering seasons, and he’s always done it with an amusingly placid, low-fi style.

This is novel for a sports star in New York, a city which typically prefers its athletes with swagger and a little bit of edge. Eli is edgeless. Peyton Manning’s kid brother is not your typical, steel-jawed, emotive quarterback, rah-rah-ing up the sideline. Win or lose, playing brilliantly or not, he always looks a little blank, like he can’t remember where he put the remote control: