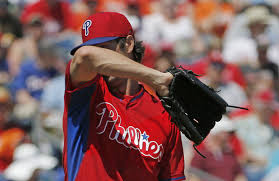 BOMBS AWAY! PHILLIES’ HAMELS ROCKED FOR 6 HITS, 5 RUNS AND A HR

If you are one of the handful of major league teams considering trading for Phillies ace lefty Cole Hamels:

The price just went down today!

Hamels allowed six hits, five runs, two walks, one home run and one wild pitch in two innings in a 16-4 loss to the Orioles. The stint included a three-run home run to Orioles first baseman Chris Davis in the first inning.

Hamels has a 9.00 ERA in three Grapefruit League starts.

“I have a goal every spring training to try to get a 10.00 ERA,” Hamels said sarcastically. “So I think I’m doing pretty well and I’ve done pretty well in my career. Nah, I’ve gotten over [spring struggles]. Over the course of a couple Spring Trainings, you know you don’t let that affect you. You have a certain agenda, and that’s what I’m going to stick to no matter what the results are.”

“Everything does feel good,” Hamels said. “It’s just finding the right base with mechanics and your vision toward the plate and just the location of where you want to throw things. Then it’s just getting the muscle memory to be able to do so. It’s just not quite there yet for me.”

The Orioles scored four more runs in the third inning against right-hander Mike Nesseth and two more in the fifth against left-hander Cesar Jimenez to take an 11-0 lead. The Orioles hit five home runs in the game overall as along with Davis’ homer, third baseman Jimmy Paredes hit a three-run homer in the second, left-fielder Nolan Reimold hit a two-run homer in the fourth, right-fielder Steve Pearce hit a solo home run in the fifth and Davis’ replacement in the lineup, Dariel Alvarez, hit a solo homer in the seventh.

Orioles pitcher Miguel Gonzalez allowed four hits, two runs and struck out four in four innings. He had not allowed a hit or run until the fourth inning.

“They faced a really good pitcher. Obviously, it wasn’t his day today,” Gonzalez said. “That’s the type of guys we have in our clubhouse. They’re going to get things done. I was really happy and fortunate to be a part of it.”