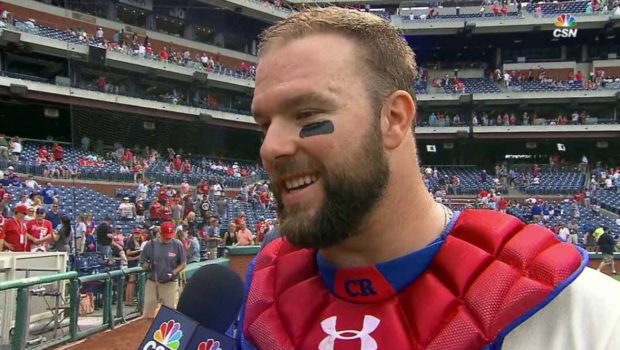 BOMBS AWAY! PHILLIES COME FROM BEHIND AND BLAST GIANTS 13-8

The Phillies squandered a huge early lead before scoring five eighth-inning runs, breaking a tie and scoring a 13-8 win.

The Giants won two of three games vs. the Phillies from June 24-26, but each game was a one-run decision. This time, the Giants erased the Phils’ 6-0 lead to take an 8-7 advantage into the bottom of the sixth. Yet the Phillies weren’t intimidated as they drove Giants ace Madison Bumgarner from the game before pulling away.

Aaron Altherr matched a career high with five RBIs, including a two-run homer in the first inning and a run-scoring single in the second inning. He then bounced a two-run single up the middle off Sergio Romo to begin the Phillies’ eighth-inning outburst, which continued with Cameron Rupp’s three-run homer.

“It should give us confidence,” Phillies manager Pete Mackanin said. “We beat Bumgarner over there in San Francisco. Anytime you beat a classy pitcher like that, a top-notch guy, it’s got to give you confidence.”

Led by Brandon Crawford and Brandon Belt, who combined for five of San Francisco’s 10 hits and six of its eight RBIs, the Giants roared back. But the Phillies began their rally in the eighth off newcomer Will Smith, who was removed after yielding Odubel Herrera’s one-out infield single and Cesar Hernandez’s double.

“Nobody flies cross-country before their first outing,” Smith said. “But that’s not an excuse by any means. I told them I was good to go and I didn’t lie to them. I felt ready. It just didn’t go my way tonight.”