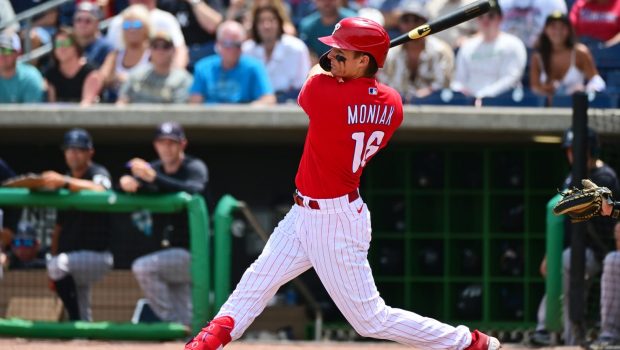 BOMBS AWAY FOR MONIAK IN CLEARWATER: PHILS NEED HIM NOW!

Mickey Moniak broke a bone in his hand on April 6, and the Phillies have tried four different centerfielders through their first 39 games.

The 24-year-old former first overall pick had played his way onto the Phillies’ opening day roster and was even in line to start the first game of the season in center field against right-hander Frankie Montas. In 35 plate appearances during spring training, Moniak hit .371 with five home runs and four doubles.

But in the Phils’ final exhibition game in Florida, at Tropicana Field two days before their regular season began, Moniak was hit by a pitch on the right wrist and he’s working his way back north with this: