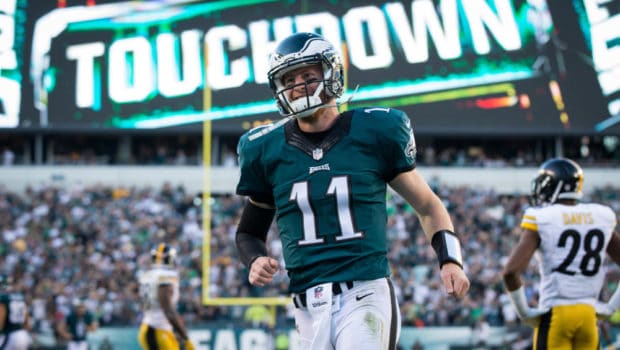 BOMBS AWAY! EAGLES’ CARSON WENTZ CAN LIGHT UP THE SUNDAY SKY!

The Birds’ retooled receiving corps was a big part of Wentz’s big day on Sunday. By signing Alshon Jeffery and Torrey Smith in free agency, the Eagles gave their young signal-caller a huge upgrade in pass-catching talent, and while both Jeffery (three catches for 38 yards) and Smith (one catch, 30 yards) were relatively quiet statistically in their debuts, their presence on the field — Smith as a deep specialist and Jeffery as a coverage-tilting true no. 1 — kept Washington’s secondary occupied. That helped open up the passing game underneath, and it helped that head coach and play-caller Doug Pederson didn’t waste much time stretching the defense vertically, dialing up a deep shot to Smith on the Eagles’ first offensive snap: