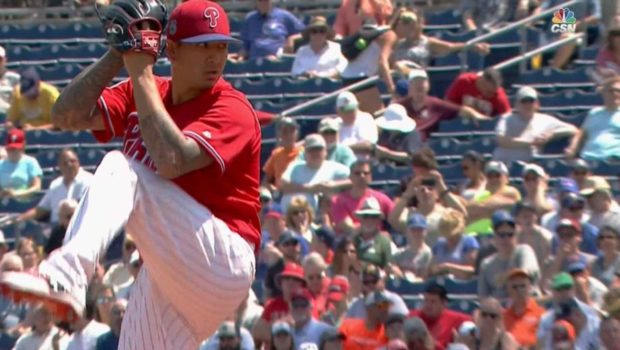 BOMBERS AWAY! YANKS BLAST NOT-SO-GREAT VINNY AND THE PHILS!

Greg Bird homered twice and Masahiro Tanaka continued his scoreless spring, keeping the Phillies off the scoreboard for 5 1/3 innings in a 7-3 Yankees win yesterday in Clearwater.

In his longest outing, Tanaka allowed no runs on three hits while striking out three, walking one and hitting a batter. For the spring, he’s struck out 22 and walked just three in 18 2/3 innings.

Opposing Tanaka, Phillies righty Vince Velasquez looked sharp early, facing the minimum through 3 1/3 innings before running into trouble. With one out in the fourth, he walked Gary Sanchez before Bird launched a two-run homer deep to right-center field. The hit snapped a 9 1/3-innings streak in which Velasquez allowed no hits, struck out 13 and walked seven.

Two innings later, the first three Yankees scored to extend the lead to 5-0. After Brett Gardner reached on an error and Sanchez laced a single off the right-field wall, Bird once again took Velasquez out of the park, this time to straightaway right. The homers were Bird’s team-leading fifth and sixth this spring.

“It’s fun to be back playing,” Bird said. “I know I keep saying that, but I feel good and I feel good playing. I feel good when I go home and the next day, so that’s nice. I didn’t have that for a long time, so I’m just enjoying that.”

“That was the whole mentality, just pitching to contact, trying to work down in the zone,” Velasquez said after the game of the two low fastballs Bird hit deep. “Everything was down, Bird just got a good swing on it and got the barrel on it.”

Velasquez struggled last season to pitch past the sixth, a focal point of his Spring Training.

“The goal is to go at least six innings or more,” he said. “I was a little bit short of 90 [pitches], but there’s 10 extra pitches left there that I can do something with next inning.”

In the eighth, the Phils got on the board as Tyler Goeddel lifted a sacrifice fly andDaniel Nava hit an RBI groundout. Pedro Florimon hit a sacrifice fly in the ninth to make it 7-3.

Cesar Hernandez, who went 2-for-3, singled to lead off the bottom of the first, snapping Tanaka’s streak of 25 consecutive at-bats without allowing a hit. Despite allowing a baserunner in each inning, Tanaka spread them out, never pitching with multiple runners on at once.