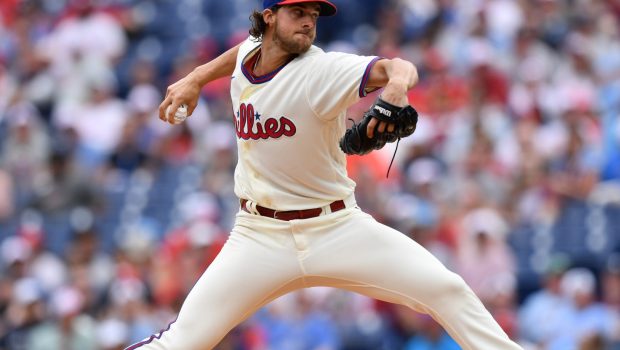 The Phillies bombed away the New York Yankees 7-0 to sweep the weekend series and extend their winning streak to four.

They also broke .500 for the first time in forever, and stand 32-31, in second place behind the Mets in NL East.

The Yankees were no match for Phillies ace Aaron Nola, who went 7 2/3 innings of scoreless baseball while allowing just three hits with nine strikeouts and just one walk.

He was staked an early four-run lead after just two innings as the Phillies got to Yankees starter Domingo German early; a rare change of pace for a pitcher that had allowed three or fewer runs in each of his previous nine starts.

Back-to-back singles by Odubel Herrera and Jean Segura put runners at the corner before J.T. Realmuto’s slow grounder scored Herrera while Gleyber Torres had no chance to get the speedy catcher at first.

Torres made up for it by snaring a Bryce Harper liner on the short-hop to turn a double-play to help limit the damage to just that early run.

The Phillies put the first two men of the inning on for a second-straight time after Andrew McCutchen doubled and Alec Bohm singled.

German nearly got out of the jam by getting Ronald Torreyes to pop out and Nola to strike out, but Herrera struck again with a run-scoring double to double the Phillies’ lead. Segura would follow with a single up the middle to give the Phillies a 4-0 lead.

Segura led the fifth inning off with a triple to put German in immediate trouble yet again and the Phillies’ advantage only grew after Realmuto drove him home with a single.

German was chased after he allowed a single to Bryce Harper as the Yankees called on Wandy Peralta to stop the bleeding. But that didn’t happen as McCutchen drove home a pair with a double to give the Phillies a 7-0 lead and cap off their scoring for the day.