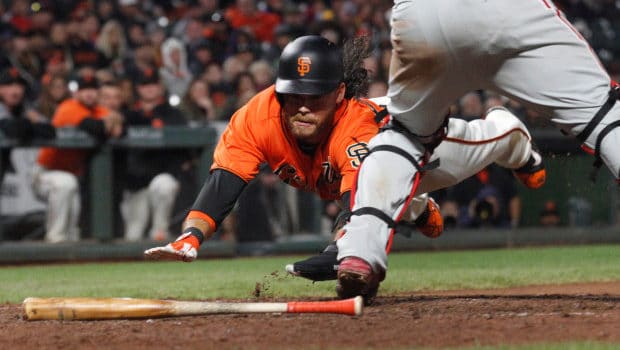 The Phillies’ lost California road trip continues by the Bay.

Matt Moore took a one-hitter into the eighth inning as San Francisco beat the Philadelphia Phillies 10-2.

Former Phillie Hunter Pence and Brandon Crawford both homered, Pablo Sandoval had an RBI single and Denard Span added three hits and made a nice running catch in center field to help San Francisco to its ninth win in the last 12 games at AT&T Park.

Moore (4-12) was crisp in his second straight strong start despite four walks, allowing two hits over 7 1/3 innings to win for the first time since June 20.

Four relievers combined for five outs to complete the four-hitter.

Jorge Alfaro singled twice and scored for the Phils.

Pence doubled and scored as part of a three-run first inning, then hit his 11th home run in the second.

Crawford tacked on with a two-run home run in the third, his 10th, after Sandoval walked. Crawford, who also doubled in the eighth, had been in a 2-for-22 slump.

The Phils didn’t get a runner past second base until the eighth when Freddy Galvis singled in both runs.

“We got four hits (and) Alfaro had two of them,” Phillies manager Pete Mackanin said. “The bats just ain’t there right now.”