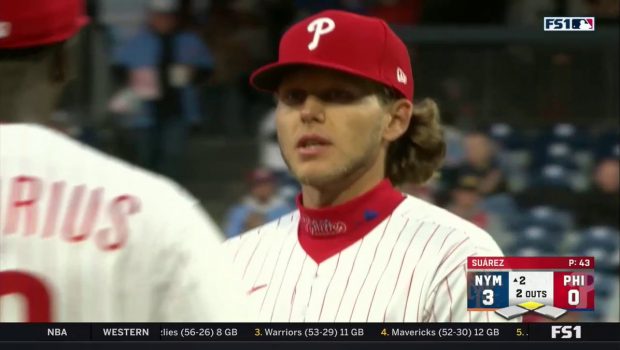 BOHM’S F-BOMB: CAN HE SURVIVE ‘I (EXPLETIVE) HATE THIS PLACE’?

Then he walked it back.

You didn’t have to be an expert lip-reader to see what Bohm said after his second error.

“I (expletive) hate this place,” he said.

Maybe a rally he ignited with a leadoff walk – and owning up to his mistake – soothed some hard feelings.

J.T. Realmuto hit a two-run homer in the eighth inning and Rhys Hoskins and Didi Gregorius followed with run-scoring doubles that helped the Philadelphia Phillies rally past the New York Mets, 5-4, on Monday night.

The Phillies trailed 4-0 before they scored five runs in the eighth against two Mets relievers. Realmuto’s first homer of the season deep into the left-field seats made it 4-3. Hoskins ripped a tying double to left off Seth Lugo (0-1), and Gregorius lined one into the right-center gap for a 5-4 lead.

Bohm made three errors at third base in the first three innings, a bad look as he tries to win the third base job over rookie Bryson Stott. Edge after this defensive disaster: Stott.

Bohm said “emotions got the best of me” and did not mean any offense toward the franchise or Philadelphia.

“I said it. Do I mean it? No,” Bohm said. “It’s a frustrating night for me, obviously. Made a few mistakes in the field. Look, these people, these fans, they just want to win. You heard it, we come back, they’re great. I’m just sorry to them. I don’t mean that.”

Bohm made his first error in the first when he charged a ball that shot off starter Ranger Suarez’s glove and made a wild, sidearm throw that sailed into right field. His second error was in the second, a routine grounder that he threw over first baseman Rhys Hoskins and into foul territory. Bohm completed the trifecta in the third on a wide throw that pulled Hoskins off the bag.

“I think it’s a kid that was frustrated,” Phillies manager Joe Girardi said. “I don’t think that kid was referring to, you know, the city of Philadelphia, the fans. I think he was referring to the situation he was in. Put yourself in his shoes.”

The Mets, though, did not score an unearned run off the three errors.

Girardi said before the game he started Bohm over Scott because of previous success against Mets starter Taijuan Walker.