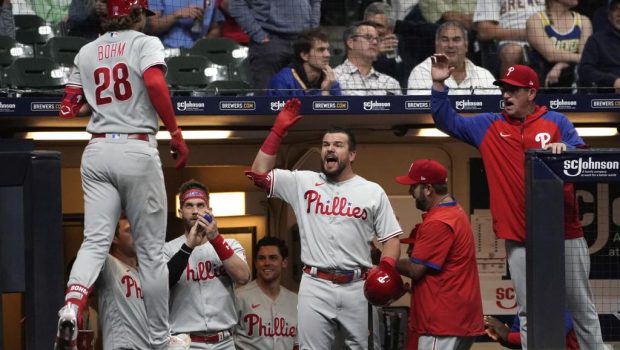 BOHM AND VIERLING 9TH-INNING JACKS LIFT PHILS TO 5TH IN A ROW!

Alec Bohm and Matt Vierling homered off Josh Hader in the ninth inning as the Phillies rallied to beat the Milwaukee Brewers 3-2 for their fifth straight win.

Milwaukee led 2-1 in the ninth and handed the game to its All-Star closer, who hadn’t blown a save — or surrendered a run — in 19 previous appearances this year.

Two batters later, pinch-hitter Vierling, in his first major league at-bat since May 10, took Hader deep again to put the Phillies in front.

Hader got a fastball up to Bohm, while Vierling connected on a slider that was down in the zone.

Vierling started his day in Omaha, Nebraska, before flying to Chicago and then taking a car service to Milwaukee, arriving a few hours before game time after being recalled from the minors.

He was mobbed by teammates after taking Hader deep.

“I came into the dugout and everybody was so fired up,” he said.

Connor Brogdon (1-0) pitched a scoreless eighth, and Corey Knebel closed it out with his 10th save in 13 tries. Knebel walked three batters to load the bases but struck out Pablo Reyes to end it. The Phillies are 4-0 since they fired manager Joe Girardi on Friday.

“We believe this is a good club and the pieces are here to win games,” Phillies interim manager Rob Thomson said. “Maybe we’re getting on a roll.”

The Brewers, who on Monday had a day off for the first time since May 19, have lost four straight.

Milwaukee took the lead in the first off Ranger Suárez when Christian Yelich reached on an infield single and scored on Andrew McCutchen’s double.

The Phillies tied it in the third when Mickey Moniak led off with a single and later scored on Bryce Harper’s sacrifice fly.

Milwaukee jumped back in front in the fourth. Yelich singled, took second on a two-out wild pitch and scored on Rowdy Tellez’s opposite-field double.

The Phillies loaded the bases with one out in the fifth before starter Jason Alexander got J.T. Realmuto to ground into an inning-ending double play.

Alexander, making his second career start, gave up seven hits and one run in five innings.

Suárez gave up six hits and two runs in seven innings. He struck out five and didn’t walk a batter. 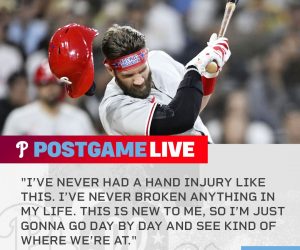