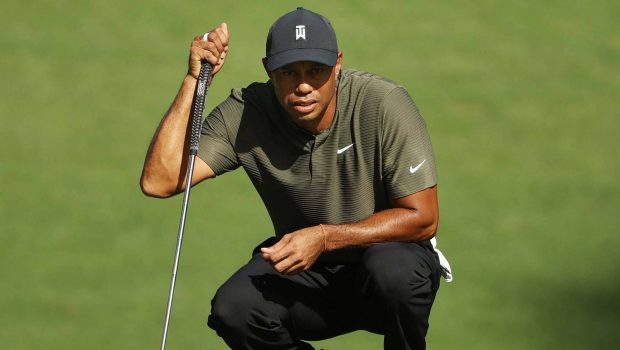 BOGEY-FREE TIGER WOODS’ 68 IS 4 BACK AT MASTERS!

By Steve Reid in Augusta

Reigning Masters champ Tiger Woods shot his first bogey-free round in a major championship in more than a decade, a 4-under-par 68 to trail leader Paul Casey by three strokes.

It was the first time in 23 Masters appearances that Woods opened the tournament without a bogey.

“I did everything well,” said Woods, who matched his best opening round in his Masters career and for just the second time shot a first round in the 60s. “I drove it well, hit my irons well, putted well. The only real bad shot I hit today I think was on [No. 8]. I had a perfect number [68 yards] with a 60-degree sand wedge and hit it on the wrong shelf.

“Other than that, I just did everything well. The only thing I could say is that I wish I could have made a couple more putts. Missed everything on the high side. Putts just aren’t moving, so it’s just different with as slow as they are, then with the weather delay, the amount of rain they’ve had.”

Woods actually caught a break with the 2-hour, 57-minute delay that pushed back his starting time to nearly 11 a.m. A few groups began play before the horn sounded to signal dangerous weather conditions. Woods would have started and played a significant part of his first nine holes in the rain.

But when he teed off before a gathering of about 100 people on the 10th tee — including NFL commissioner Roger Goodell and former quarterback Peyton Manning, both Augusta National members — the sun was out and the air warm.

Getting used to a spectator-less environment is something that Woods is unlikely ever to adjust to, as he noted that several times players in the group had to ask television personnel where their golf balls landed.

For the most part, it was on the fairways and greens for Woods, who hit 10 of 14 fairways and 15 of 18 greens. He lamented a few missed putts, and after birdieing both back-nine par-5s and the 16th to turn in 33, he added just one birdie on the front, a 20-footer at the first.

But he was unable to birdie either front-side par-5 and missed chances from inside 15 feet at the fourth, sixth and ninth holes. Still, it was the first time since the first round of the 2009 PGA Championship — a span of 105 rounds — that Woods did not make a bogey during a major championship.

And unlike his six other tournaments since the pandemic shutdown, Woods does not find himself battling well back of the leaders. “I think that understanding this golf course is so important,” he said.

Woods, 44, is playing with reigning Open champion Shane Lowry — who played with Woods for the first time — and 2019 U.S. Amateur champion Andy Ogletree, who started 4 over par through four holes but managed to shoot 73.