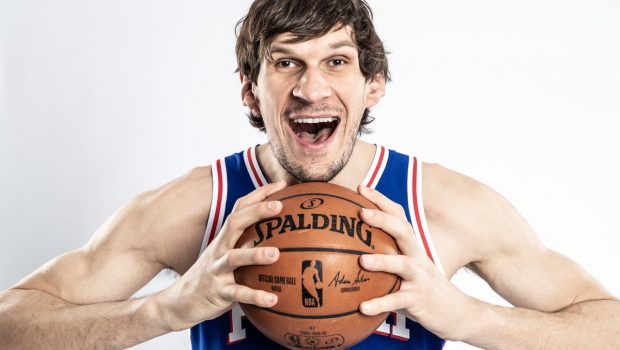 BOBI AND TOBI LIFT JOJO-LESS SIXERS PAST THE HEAT!

Boban Marjanovic had 19 points and 12 rebounds and made three key free throws in the final 1 1/2 minutes as the Sixers beat the Miami Heat 106-102.

”He was our bell-ringer tonight,” Sixers coach Brett Brown said.

Tobias Harris had 12 of his 23 points in the fourth quarter and JJ Redick hit a late 3-pointer to lift Philly to its first win without Joel Embiid, who’s expected to miss at least a week with a sore left knee.

Kelly Olynyk then missed a 3-point attempt, and Marjanovic made the first of two free throws with 38.3 ticks left to put Philadelphia up five.

”He was fantastic,” Redick said about Marjanovic. ”He really stepped up for us tonight.”

Perhaps the only way Marjanovic didn’t impersonate Embiid was after the game, as he was unavailable for comment due to treatment – quite unlike the loquacious and quotable Embiid.

It was left to his teammates to speak for his performance.

Added Harris, ”I was surprised he didn’t shoot a 3 tonight because he had it going.”

Marjanovic, starting for Embiid, had 11 points and seven rebounds to help Philly to a 23-13 lead before being lifted with 3:34 left in the first quarter. He returned 3 1/2 minutes into the second, finishing the half with 16 points and eight rebounds while making all six of his field-goal attempts to help the 76ers to a 57-50 halftime lead.

”He’s incredibly skilled for a man of his size,” Brown said.