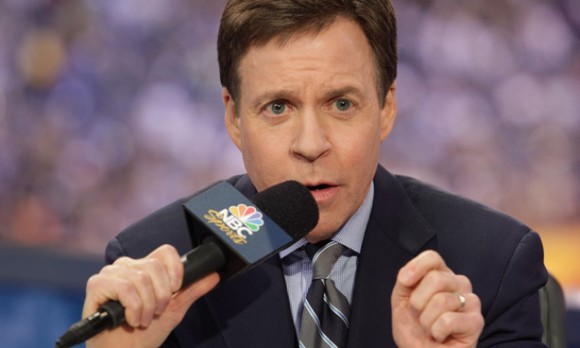 But three months before the Super Bowl, the plan imploded during one dramatic week. First, on Nov. 7, 2017, Costas appeared at a journalism symposium at the University of Maryland.

There, he told a crowd of more than 400, “The issue [in sports] that is most substantial — the existential issue — is the nature of football itself.”

He then went on a nearly one-and-a-half minute riff about football and brain damage that was punctuated by this statement: “The reality is that this game destroys people’s brains — not everyone’s, but a substantial number. It’s not a small number, it’s a considerable number. It destroys their brains.”

By this point, Costas’ line at Maryland — This game destroys people’s brains — had gone viral, raising hackles in the NBC offices. The New York Daily News asked NBC for comment, and a spokesman responded, “Bob’s opinions are his own, and they do not represent those of the NBC Sports Group” — prompting a story from Raissman under the headline, “NBC throws Bob Costas under the bus and in the process sends warning to rest of its talent.”

Sensing a budding problem with his employer, Costas says he decided to appear on CNN on Saturday morning to make it clear he wasn’t being critical of NBC. So, for the third time in a week, Costas was talking publicly about football and brain damage. He didn’t soften any of his comments — in fact, he reiterated them — but he did attempt to defend the network.

“I’ve been saying these things for the better part of a decade, and often on NBC, in front of the biggest audience not just in all of sports, but in all of television — ‘Sunday Night Football,'” Costas told host Michael Smerconish. “And I think NBC Sports deserves credit for this.”

Within an hour, Costas says he received a text from Flood, who oversees sports production for NBC.

“I think the words were, ‘You’ve crossed the line,'” says Costas, who says he no longer has the text.

“My thought was, ‘What line have I crossed?'”

Later, Costas says he pointed out that he had been saying these things about football for years — often on NBC. That didn’t matter; it seemed this was one time too many.

Costas was told he was off the Super Bowl LII broadcast.