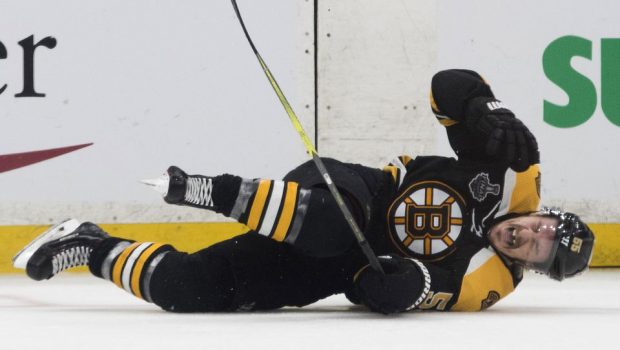 According to the whining Boston Globe:

That’s how Game 5 of the Stanley Cup Final ended on last night at TD Garden, where there should have been yellow tape surrounding the ice.

This was a crime scene, folks.

The Bruins were the victims of hockey highway robbery, and their own inability to cash in until it was too late, in a 2-1 loss that sends the series back to St. Louis for Game 6 with Boston fighting to extend their season and their grip on the Cup slipping. In the key sequence, referees Steve Kozari and Kelly Sutherland kept their whistles quiet and their arms down after Blues forward Tyler Bozak tripped Bruins forward Noel Acciari, helping lead to the game-winning goal by David Perron at 10:36 of the third period.

That decision had everyone with an affinity for or an affiliation with the Bruins up in arms. Disbelief filled the silence where the sound of a whistle and the announcement of a penalty should have been.

“Yeah, it should have been a penalty for sure,” said Bruins defenseman Torey Krug, on the ice for the fateful non-call. “Anytime it leads to a scoring chance for the opposition, it’s got to be blown down. It’s got to be called. I’m all for letting plays go and playing hard, even the one at the end of the second there. They get a scoring chance out of it because [Oskar Sundqvist] is holding my arm.

That’s hard to do considering last night’s heist could be the final game on Causeway Street this season. The dubious goal looms as the difference in a pivotal fifth game — and potentially the series.