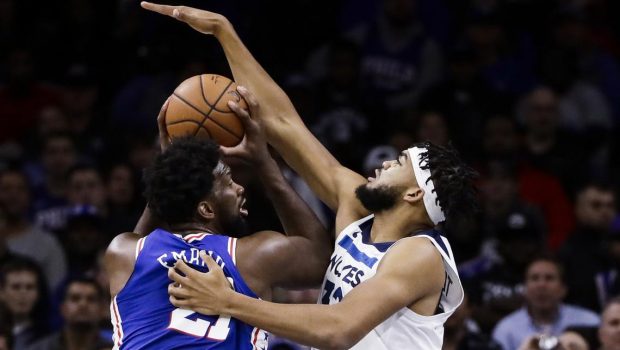 Perhaps lost in all the sound and fury of last night’s Joel Embiid with Karl-Anthony Towns fight is the fact that the Sixers are playing like a legitimate NBA championship contender.

Embiid scored 19 points before he was ejected for fighting with Towns, and the Sixers cruised to a 117-95 victory for their fourth straight win to begin the season.

“I didn’t throw any punches, so I shouldn’t get suspended,” Embiid said.

Embiid and Towns were tossed after a video review.

“I was built for this city,” Embiid said. “The love they have for me, I can’t thank them enough. I appreciate all the love. That reaction was probably the loudest I ever heard them. That’s what the city of Philadelphia is all about. You gotta come in here, you gotta fight, you gotta play hard, you gotta be gritty, you gotta be a Broad Street Bully. We’re gonna keep on fighting and try to accomplish the goal we have set for us.”

Both teams entered 3-0. The Spurs, at 3-0, are the only other unbeaten team in the NBA.

Tobias Harris scored 18 points, Furkan Korkmaz had 17 off the bench and Simmons added 16 for Philadelphia. Al Horford grabbed 16 rebounds to go with 12 points.

Minnesota led 11-9 midway through the first quarter before Harris hit a 3-pointer. Harris followed with a driving layup and Philadelphia led the rest of the way.

Embiid punctuated a dominant first half with a 3 to put the Sixers up 63-42 going into the break.

“It’s competitive, we knew it was going to be that way,” Timberwolves coach Ryan Saunders said.