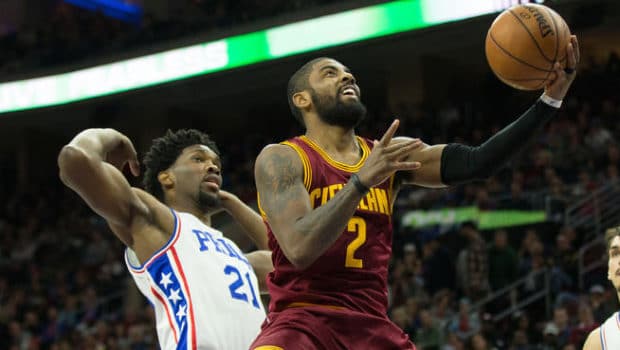 CAVS SEND KYRIE TO CELTS FOR ISAIAH, CROWDER, ZIZIC AND A 1!

The Sixers’ road in the Eastern Conference just got a little bit tricker.

The Cleveland Cavaliers sent Kyrie Irving, one of the most dynamic playmakers in the league, to the Boston Celtics in exchange for a hefty package headlined by Isaiah Thomas, a two-time All-Star. In exchange for Irving, Boston also agreed to send forward Jae Crowder, center Ante Zizic and a 2018 first-round draft pick to Cleveland.

It was a seismic trade in an already busy summer for the NBA, in which a raft of stars relocated to new teams. Among them was Gordon Hayward, an All-Star forward who left the Utah Jazz in free agency last month to sign a lucrative contract with the Celtics, who have reshaped their roster after finishing with the top record in the conference last season.

Irving, a four-time All-Star, has three years and $60.3 million remaining on his contract, which includes a player option for the final season.

“For all he’s accomplished, we think his best years are ahead of him,” Danny Ainge, the Celtics’ president for basketball operations, said in a statement.

The Cavaliers made the most of a challenging situation. Irving, 25, averaged 25.2 points, 5.8 assists and 3.2 rebounds a game last season and helped the Cavaliers make their third straight appearance in the NBA finals.

But Irving approached the team last month to ask for a trade — in part so he could escape LeBron James’s colossal shadow in Cleveland.

Thomas emerged as a bona fide star for the Celtics last season, averaging a career-high 28.9 points and 5.9 assists while shooting 46.3 percent from the field before a hip injury forced him out of the playoffs.

Crowder, a physical player, averaged 13.9 points a game last season, and Zizic is a highly regarded prospect from Europe. In addition, the first-round pick that the Cavaliers acquired originally belonged to the Nets — which means that it will most likely be a lottery pick.

Thomas, at 5-9 is one of the shortest players in the league, had led the Celtics’ resurgence in recent years.

“Isaiah embodied what it meant to be a Celtic,” Ainge said.

But Thomas is due for free agency next summer, and the Celtics harbored concerns about potentially shelling out millions for the maximum contract that Thomas is expected to command. By trading him now, Boston was able to land a franchise-altering talent in Irving — a player who got the fresh start that he wanted. The rest is up to him.