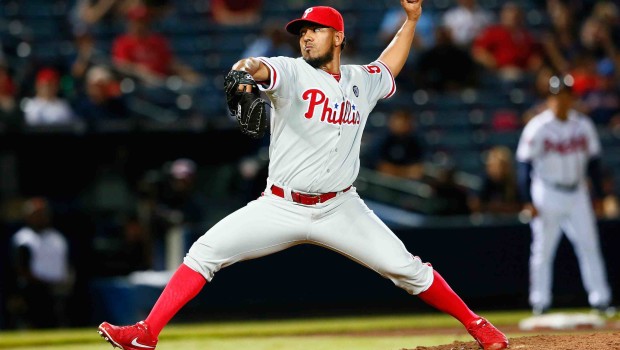 All year long Phillies fans had referred to their favorites as the Blanking Phillies, blanking being a euphemism for a more expressive adjective.

Now the pitching staff has given blanking a positive spin.

Kyle Kendrick allowed only three hits in seven scoreless innings, Carlos Ruiz homered and drove in two runs, and the Phillies shut out the struggling Atlanta Braves 4-0 on Tuesday night.

One day after Cole Hamels and three relievers threw the first combined no-hitter in Phillies history, Kendrick (8-11) and relievers Ken Giles and Antonio Bastardo (photo above) were dominant in the three-hit shutout.

The Braves, who began the night 1 1/2 games behind the NL wild-card leaders, have lost three of four. With two straight shutout losses, they haven’t scored in 24 consecutive innings. Their only run in their last 36 innings was a homer by Evan Gattis in a 1-0 win over the Marlins on Sunday.

Jason Heyward had two doubles. Atlanta’s only other hit was a third-inning single by Andrelton Simmons.

Bastardo struck out the side in the ninth.

Kendrick, who began the night with a 4.97 ERA, had four strikeouts and two walks while winning his third straight start. It was his first start without allowing a run since throwing 6 2-3 scoreless innings in a 9-0 win over Colorado on May 26.

Ruiz led off the fifth with line-drive homer into the left-field seats off Mike Minor (6-9). Darrin Ruf’s run-scoring single in the sixth drove in Ben Revere for a 2-0 lead. Ruiz doubled in a run in the eighth.

Phillies third baseman Mikael Franco was 0-for-3 with a RBI in his much-anticipated major league debut. His fly ball to center field in the eighth drove in Ruf.
Minor allowed three runs on seven hits in 7 1-3 innings.

A promising first inning for the Braves only led to more frustrations. Heyward led off with a double to right field. With one out, Freddie Freeman walked and Kendrick hit Justin Upton with a pitch. Kendrick recovered to strike out Evan Gattis, who chased a pitch in the dirt, and Chris Johnson.

Ben Revere led off the sixth with his second single. He quickly advanced on his second stolen base of the game and, with two outs, moved to third on a wild pitch. Ruf drove in Revere with a single to right field for a 2-0 lead.