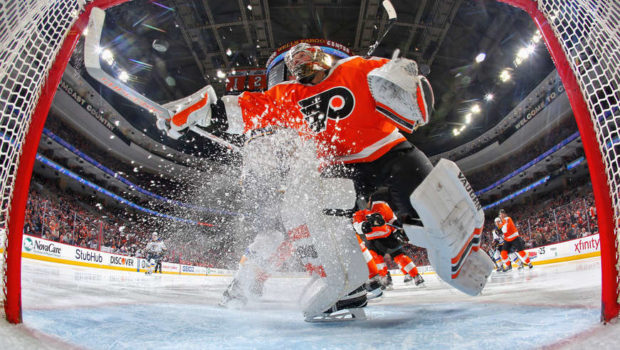 Carter Hutton made 26 saves, and forward Kenny Agostino made his return to the NHL a memorable one by scoring for the St. Louis Blues in a 2-0 victory against the Flyers last night at the Wells.

Agostino beat goalie Michal Neuvirth (above) on a breakaway to give the Blues a 2-0 lead 2:10 into the third period.

It was Agostino’s first NHL game since playing for the Calgary Flames against the Blues on March 14, 2016. The 24-year-old forward was recalled Sunday from Chicago of the American Hockey League, which he leads with 42 assists and 60 points in 48 games.

The shutout was Hutton’s third of the season, second in his past three starts.

Neuvirth made 14 saves for the Flyers (26-21-7), who were shut out for the second straight game after a 1-0 loss in overtime against the Los Angeles Kings on Saturday.

Philly has not scored in 122:49, dating to Sean Couturier’s empty-net goal with 14 seconds left in a 3-1 win against the Montreal Canadiens on Thursday.

The Blues took a 1-0 lead at 15:22 of the second period when Kevin Shattenkirk’s one-timer from the right point hit Paul Stastny’s right skate and got past Neuvirth.

Flyers coach Dave Hakstol challenged that the goal came following an offside play, but it was determined that there was no conclusive evidence to overturn the call.

“We know what we got on the power play, we just have to make sure we execute things better,” Flyers forward Jakub Voracek said. “Sometimes teams play a different style of killing. Usually that’s the first power play when they play something different. Try to get used to it, but then the second and third one should be better. We get a goal on the power play, it’s a different game.”